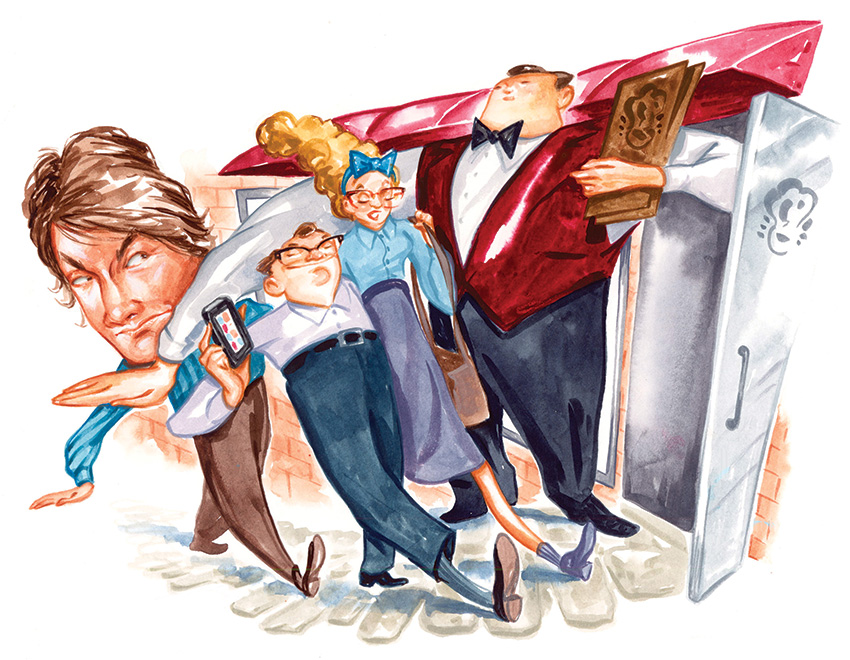 When I go to a restaurant for the first time, I usually run into people I know. It’s an interesting, important new place, and we interesting, important people are there. None of us has gone to OpenTable for our reservations. We know people. Or more accurately, they know us. We tend to forget their names and have to search through old e-mails to find them.

This is why you can get a table only at 5:30 p.m. on a Tuesday at Orsa & Winston. Tech people see this lack of transparency as an opportunity to disrupt a broken paradigm with an orthogonal solution. (Silicon Valley guys talk like people who eat dinner in Jetsons-style pill form.)

Their solution is to fund a bunch of new apps—Resy, Table8, Reserve—that allow diners to pay between $5 and $25 for a 7 p.m. Saturday night table for two at Mélisse that’s officially booked but probably being saved for last-minute VIPs. These apps have been accused of elitism. Sadly, the opposite is true. Table8’s business plan means that instead of sitting next to Judd Apatow at Trois Mec, Harvey Weinstein could be next to a dentist from Cheyenne, assuming there are dentists in Cheyenne.

We have built a complicated hierarchy of food tweeters, food bloggers, food podcasters, public-radio food hosts, and food magazine writers—not to mention actual famous people—to whom we dole out hot reservations. There’s a good reason you’re not allowed to buy tickets to the Oscars; there’s a good reason the bouncer behind the velvet ropes doesn’t auction off spots in the club. And there’s a good reason that the best, newest places won’t be on these apps. Here’s what important restaurants really do every night before serving: They Google everyone on the reservation list so they can treat them differently. For Maude, an extra $25 reservation fee isn’t worth giving away Jenji Kohan’s table.

So the fact that Bestia is charging $25 on Table8 for a 7 p.m. spot on a Friday simply tells me that it’s time to move on to Alimento. And to e-mail someone I know who knows the chef there. I’ll have to look up her name.

Do We Really Need Waiters Anymore?

How to Be a Pothead Without Eating Like One

L.A.’s Restaurant Scene Isn’t Really the Best in the Nation—Yet