Home Dining Chefs and Restaurateurs Intolerable Foodie: Save the Scraps for Me 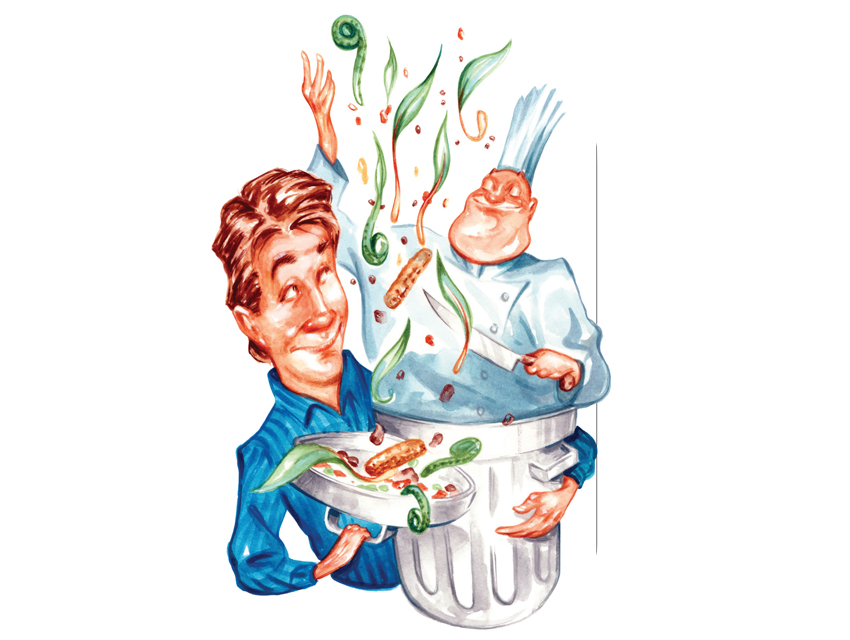 Sure, nose-to-tail cooking was thrilling 15 years ago. But I have no doubt that they are now frying Bloomin’ Pig’s Ears at Applebee’s. Luckily chefs today are scavenging in the compost pile and making dishes I’m not yet bored with.

In March Dan Barber turned Manhattan’s Blue Hill into a pop-up called wastED, where he stewed kale ribs, fried skate cartilage for dipping in fish head-infused tartar sauce, and prepared veggie burgers with pulp taken from a cold-pressed-juice company (which is the first good use of cold-pressed juice other than to warn men which women not to date). Chicago’s Grant Achatz showed up to make food with spent hops and coffee. I have no idea what those things taste like besides awful, but I enjoy seeing a chef tackle a bigger challenge than I do in my kitchen. There I’ve already got an immersion circulator and agar-agar but not the guts to touch coffee grounds.

This isn’t Bizarre Foods’ Andrew Zimmern sport-eating. This is about finding foods that taste like something instead of just selecting the parts that Americans aren’t too lazy to chew. We have moved so far from cooking with interesting ingredients that people have gotten excited about drinking “bone broth”—which, by the way, is like calling chicken “chicken chicken.” All meat broth has bones in it, my friends. Otherwise it’s “water broth.”

It’s adorable to fetishize ramps or fiddlehead ferns or whichever seasonal foraged vegetable the Food Network told you to get excited about, but there are novel ingredients far easier to get: carrot tops, parsley roots, okra leaves, toasted banana leaves, fish eyes. You know, things people eat all the time in the rest of the world.

But that’s not enough. I want to eat corncobs, milk skin, algae, and bark, like they do at Noma. I want to experience the new and also help the environment or the climate or whatever it is people who watch MSNBC feel superior about. And I want to do it at a restaurant so that important people can see what a good person I am. So, a really expensive restaurant.

Behind the Scenes: An L.A. Taco Crawl and Finding Bull Testicle Ceviche for Andrew Zimmern

Netflix Buzz: What to Stream When You Feel Like Drinking