Imagine yourself having a day off from work. You step outside on a warm, summer day and sit next to your crystal clear blue pool as the California breeze gently touches your skin. Your partner brings out a rack of lamb and you dig in with a refreshing can of the best agave spirit that’s ever touched your lips. Tastebuds watering yet? That’s how Justin Hartley describes the magic behind his new one-of-a-kind REVEL Avila Spritz.

Hartley has always had an interest in the alcohol business. From brewing his own beer to exploring Ireland for the perfect Irish Whiskey, the This is Us star has traveled far and wide to find his place in the competitive industry. It wasn’t until REVEL Spirits founder Micah McFarlane unexpectedly struck up a conversation with Hartley, thinking it was one of his close friends he hadn’t seen in awhile, that fate showed up at the actor’s doorstep, or rather a wine tasting. The moment of “mistaken identity” ended up being a good laugh and an even better excuse to discuss their mutual interests in the industry, and next thing you know, Hartley had a seat at the REVEL table.

“A bottle of REVEL is beautiful to look at, but what’s in the bottle, that’s where the prize is,” Hartley told Los Angeles magazine. “It’s the greatest agave spirit I’ve ever had in my life. It’s not too sweet. It’s got a little smoke. Every flavor profile that you love is in there without overpowering what it is. We started talking from there and how I can help him and getting to launch my Avila Spritz’s has just been amazing. It’s a lot of work, but a wonderful thing.”

Though Hartley has already found massive success starring in projects such as This Is Us, Smallville, and A Bad Moms Christmas, the 45-year-old actor made it a priority to not allow his money or fame be the backing of the brand, but rather his genuine passion for the work and craft that goes behind the smoothest sip of agave.

“It’s fun for me. It’s a passion. I think it’s about the story,” Hartley said. “I can put my name on a pair of jeans, but I don’t understand that necessarily. I always loved when you’re talking to someone who is involved with something great and you listen to the way they talk about it, you can tell it’s more than something they’re good at. You can tell they’re not just doing it for the money. This whole thing started as a family business, and everyone is really honed in and really cares about this process and the product and making it the best we can. Being around spirits like that is contagious and makes you level up.”

Since buying REVEL in 2020, Hartley has traveled down to Morelos, Mexico to oversee and assist with the creation of his own spritz. Hartley gained experiences such as walking next to piercing six foot high agave plants with the farmers, having a hand in the extremely precise distillery process, and participating in quite possibly just one too many tastings from his own barrel.

“I’m not from Morelos. I’m not a farmer, so for me it was important to go down there and see how everything worked, and to continue to go down there and be a part of it as much as I can,” Hartley said. “It’s important because we’re asking people to spend money on this stuff so when someone asks you a question, you should be able to answer. These farmers really care about this product, their land, and their community. This is a product that will allow people to start a conversation about Morelos, Mexico, which a lot of people don’t know about. It’s a beautiful thing all around.” 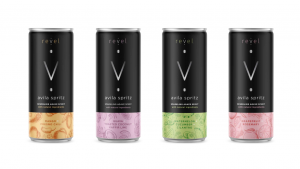 Hartley speaks incredibly highly of the agave, and his pride is clear. But why bottle his masterpiece in a can? The simple answer: Accessibility.

“There’s many of these spritzers, cocktails in a can, some of them are good, but most of them either taste the same or are bad, and everyone is trying to get into this game because there’s a market for it,” Hartley said. “But you can’t just make something, put it in a can, and expect people to buy it and drink it.”

“Avila Spritz’s are designer cocktails that happen to be in a can, which is very convenient, so the flavors had to be high end,” he added. “I’ve seen pictures of my friends eating hot dogs and drinking these on the golf course, and I’ve gone out to the pool and poured it over ice with a rack of lamb.”

That is what Hartley created in Avila Spritz, a 100 percent pure agave spirit that is blended with the finest, hand-selected flavor combinations to create a unique and refreshing surprise for your tastebuds. Flavors include mango and fresno chili; guava, toasted coconut and kaffir lime; watermelon, cucumber and cilantro; and grapefruit with rosemary.

“Justin was instrumental on creating the flavors and honing it in,” REVEL’s General Manager, Wrennie West said. “We were creating this particular item during COVID, so we were getting samples shipped to our houses and then we’d get on Zoom together, critique everything, send it back, and then get another sample. We started the flavors in one place and Justin would be like, ‘Let’s throw in some rosemary or a different herb.’ The original flavors where we started were inspired by a cocktail, so it was flavors we knew would compliment the Avila.”

“They’re just special. There’s nothing like it. These four flavors are so unique to everything else on the market, and it all starts with our Avila. Our blanco. We started at the best possible place you can be at, which is the best agave spirit and then we added these fun flavors to it,” Hartley said.