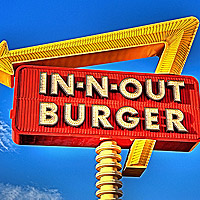 Today is the day we celebrate 60 years of In-N-Out burger. On October 22, 1948, Harry and Esther Snyder fired up that grill at store #1 in Baldwin Park and introduced the world to the Double Double. With all the anniversaries and price rollbacks we’ve enjoyed lately (Philippe’s and Canter’s both celebrated earlier this month) the official-looking announcement from In-N-Out seemed legit. Who knows where it started, but the company has been debunking the rumor of 25-cent burgers all week.

I stopped by the Culver City location last night and witnessed a mini burger brawl when a group of customers confronted a counterman who was repeating the chain’s “no discounting” policy which provoked a debate on In-N-Out’s lack of union labor which somehow led to pipe fitters and plumbers and Wal-Mart and… I quickly polished off my burger and headed out the door before this October Revolution went any further.