Home Dining I’m a Female Sushi Chef. Get Over It 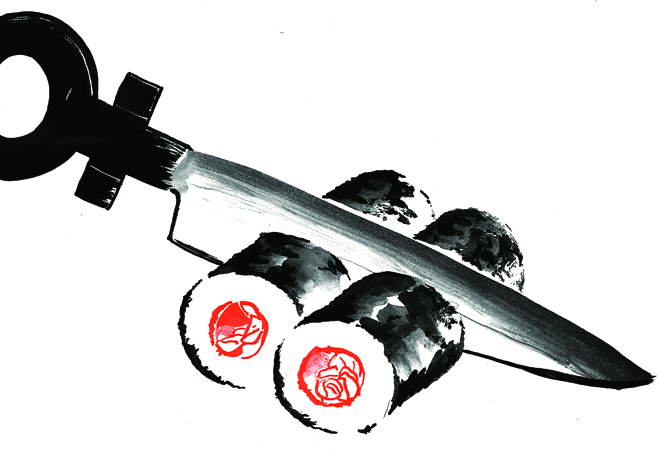 When I was 21, I enrolled in the Southern California School of Culinary Arts. They place you in an externship at a local establishment, and I was lucky to end up in the kitchen with Takao Izumida at his Brentwood restaurant. He and the other sushi chefs there, Mori and Hiro, were very open-minded. But even there, sushi was definitely a man’s world.

After that I went to Japan to work in a ryokan—like an inn—and learn about kaiseki cuisine. It’s different there. It’s such a patriarchal society, most women don’t even dream of bigger things. There are recent stories of Japanese sushi-chef fathers teaching their daughters the business, but it’s still very rare. I constantly feel fortunate that I grew up in this country.

In 2000, I opened the all-female-run Azami Sushi Cafe on Melrose. In the eight years it was in business, I experienced plenty of discrimination. Japanese men would come, see me, and leave. At the time it bothered me, but I understand now that there is a stereotype of what a sushi chef should look like. We were not it.

That’s why, when I opened n/naka, I thought it would be great if people didn’t see me. All expectations are gone when I’m hidden away in the kitchen. Today n/naka is all women and one man. It’s a coincidence, but I feel lucky. I hope we inspire more Japanese women to reach further. Anything is possible. 3455 S. Overland Ave., Culver City, n-naka.com.