Home Architecture The Bulldog Cafe Comes Back to Life to Supply You with Christmas... 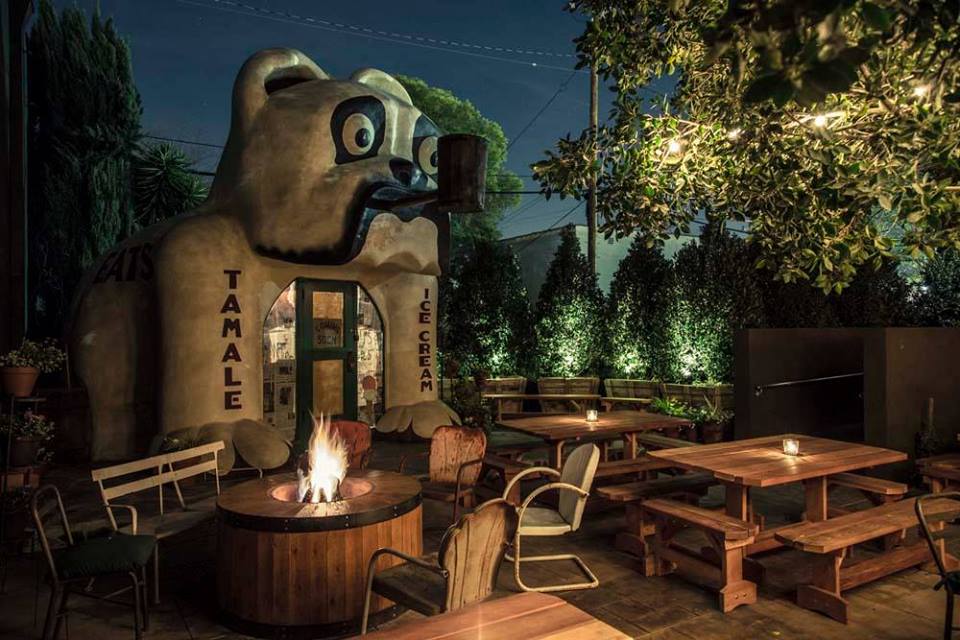 The back patio of North Hollywood’s Idle Hour bar is dominated by a hulking structure in the shape of a pipe-smoking bulldog with the words “tamales” and “ice cream” painted on its legs. It’s a replica of the Bulldog Cafe, which operated in L.A. from 1928 to the ’60s, but has mostly been a decorative item–until now. After years of requests from patrons, it will operate as a real-life cafe, serving Christmas tamales December 21 to 25.

For nearly 40 years, Bulldog Cafe served tamales and ice cream from a spot on Washington Boulevard. Eventually it was demolished, but the structure was captured in historic photographs and pop-culture lore. An illustration of the mimetic building appears on the cover of The Rocketeer: Chapter 4 comic book, and when a 1991 film was made based on the retro superhero, Disney constructed a replica of the cafe as part of the set.

The replica’s next act took it inside the Petersen Museum, as part of an exhibit about L.A.’s roadside culture. In 2014, the museum was ready to update and no longer needed the piece. Bobby Green of 1933 Group, which owns Idle Hour, purchased it and had it carefully disassembled, moved, and rebuilt at the NoHo property. It fit perfectly with the theme, since the barrel-shaped building that houses Idle Hour is itself a bit of mimetic architecture from around the same period.

Since being installed during the bar’s 2015 restoration, the bulldog has been primarily decorative, but since Christmas is everyone’s favorite time for tamales, the owners decided it was time to put the pooch to work.

Come into the bar and order a plate of carnitas with green tomatillo salsa or Oaxacan cheese and poblano chile with chipotle salsa ($9 for two); maybe order a Winter in L.A. cocktail as accompaniment. Idle Hour will be open regular hours December 21 through 24 and 7:30 p.m. to 2 a.m. on Christmas Day. Tamale lovers can also place to-go orders for batches of six or more by emailing [email protected] ($25 per half dozen). Large orders require 48 hours notice.

RELATED: Your Guide to the Best Holiday Events in Los Angeles This Year

The Best Places to Order Tamales for Your Holiday Table