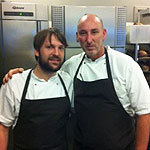 Chef Marc Gold spent much of October and the better part of November in Copenhagen, working for free at what many consider the best restaurant in the world: the two-Michelin-starred Noma. Why would the chef-owner of Beverly Boulevard’s successful Eva abandon his post to toil away picking at veal necks in Denmark for weeks on end? Because Noma’s René Redzepi is no ordinary chef, and his stringent standards as well as his uniquely Nordic approach to ingredients and sourcing (the guy pretty much invented the modern understanding of foraging) has made him one of the top chefs on the planet. Gold holed up in Redzepi’s kitchen to do what is called staging—essentially a really fancy unpaid internship—in order to learn some new techniques, refocus, and concentrate on nothing more than cooking for a while. While he was gone, his restaurant just about went under after the city threatened to take their liquor license away unless they raised the money to put in some new parking spots. (Thanks to his wife Alejandra, they managed to pull in the necessary $12,000.) But it was all worth it for what Gold says was one of the more inspiring periods of his life. We caught up with Gold a few months post-stage and asked him to tell us what it was like to cook inside one of the world’s most extolled restaurants.

LAMAG: How did this opportunity come about?

Marc Gold: One of our investors was just there, and is friendly with René. I was looking for some new inspiration since I have been at the restaurant for over three years without a break. I told him I would love to go, and he had forwarded my letter along with his recommendation. I received an email back within a couple of days.

What does it mean to “stage” at Noma?

It’s to really immerse yourself in the day to day running of the restaurant. My day would start at 7 a.m. and I would not finish until midnight. There are 25 others stagiers in the kitchen with you. You are responsible for the mise en place for the downstairs kitchen. The intensity of the kitchen, and the attention to detail is incredible. And just the structure of the kitchen is impressive. It is very detail-oriented, as I am sure you can imagine. You have a crew of 45 chefs cooking for 40 people for lunch and 40 people for dinner—that’s it! They have a total of six stations where they rotate the stagiers through: Snacks, Station 1, Station 2, Station 3, Pastry, and R&D. Depending on the length of your stay, you will most likely work in at least three of them.

How closely did you work with René?

René does not spend too much time in the kitchen during service. He spends a lot of time in the R&D kitchen as well as on the computer doing research. He actually pulled me aside one day and told me how he had been researching about the situation I was facing with the city, and that he wished me luck. He’s a really good guy who seems to care about his staff.

What was the most difficult/craziest thing you did while working there?

That was probably when they got starfish in and started experimenting with it. I thought that was pretty crazy. Also, picking fibers from the neck of veal. We would spend two hours at the end if the night picking hair-like fibers from the neck of braised veal. Each night, there would be, like, four guys just picking fibers for one garnish for one of the dishes—and the dish was only an extra course for VIP tables!

Generally, how do you think the experience helped you? What did you learn from it?

I went for different reasons then most. I was definitely the oldest one in the kitchen. It is a very young team—most of the paid chefs are under 30 years old and the stagiers are also young chefs who are looking to put the experience on their resume. For me, it was not about my resume—it was about inspiration. I wanted to really clear my head and refocus to be able to continue to grow. Owning a restaurant is difficult. I haven’t been able to get away and eat or just take time to research and look through cookbooks. I needed the time to inspire my thoughts, refocus, and have a clearer vision moving forward. This is what I wanted out of the experience. What I learned, or what I took from my experience, was the philosophy of cooking. Why are they doing certain things? Aging protein, fermentation, pickling vegetables, using products that are indigenous to your surroundings, foraging.

How was the rest of your stay in Denmark?

Amazing. Copenhagen is a small city, so on my days off I would get on my bike and go to one part of the town and explore. The weather was still quite nice, a little chilly, but not too bad. It is really a beautiful city full of beautiful and happy people. On m first day there I decided to go to the promenade, a walking street with shops and restaurants. I went to a café, ordered an egg sandwich on brown bread and a latte, paid the bill and left. When I got home, I converted the bill from krones to American dollars, and it turned out to be a $34 sandwich! It is expensive in Copenhagen.

Do you think Noma is the best restaurant in the world?

You know, that is very hard to say, especially since I have not had much exposure to restaurants that are cooking at this level. I can say this though: that their commitment to excellence, attention to detail, the drive, the passion, the research that they do, the hours put in to create a single dish, and the team that René has assembled—I would say it would be hard for anyone to be ranked above them. It is quite something to see. Meticulous, clockwork, detail, organized, commitment, team!