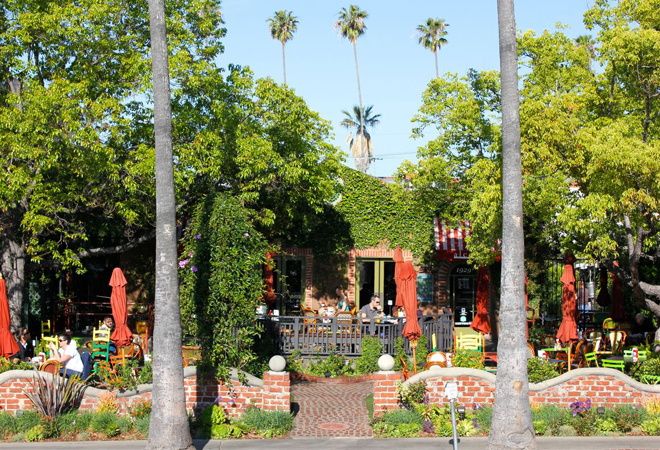 In the summer of 2004 I broke down and got a job. The freelance writer’s life was good, but slow going, and the occasional profile of some Swedish electro-pop act was not paying for my Koreatown studio. So, I answered an ad on Craigslist looking to hire front-of-house staff for a café opening in Los Feliz. It was going to be housed in a converted bungalow on Hillhurst Avenue (as soon as construction was finished, of course) with a wraparound patio dotted with Parisian-style bistro seating. It was going to have fancy coffee (by 2004 standards, anyway), a gleaming case of frilly pastries, and an all-day menu that included stuff like olive-bread panini and smoked salmon benedicts. In other words, the tips were going to be great.

I got the job of  “key holder,” a kind of shift manager, at Alcove Café having never made a cappuccino in my life. Six months later Giovanni Ribisi insisted that I was the only one who made it the way he liked: large paper cup, extra foam. To this day I have dreams where I’m pulling the perfect espresso shot.

Tom Trellis, Alcove’s owner, was (and I’m sure still is) a perfectionist in a way that was impossible not to admire. He buzzed about the place with the nervous energy of a very tall and handsome fruit fly, endlessly readjusting the arrangement of croissants. Tom let me curate the restaurant’s soundtrack, a task I took an annoying amount of pride in and is probably the reason you like Kings of Convenience.

The chef at the time I blame for the 20 extraneous pounds I gained during my stint—she delighted in sneaking a six-inch pile of bacon beside my mid-shift scramble. The original crew behind the registers wasn’t your typical bunch of actors (though most of them were actors). They were smart, shrewdly funny, fast as Arjen Robben behind the steam wand, and oddly serious about the gig for a bunch of part-time baristas. I’m still friends with many of them today.

After about two years behind the counter I finally got hired at one of the magazines I had been scrawling CD reviews for and said goodbye to Alcove. I don’t go in very often anymore—not because I don’t like the place (I really do) but because it makes me a little homesick. See, I’m pretty good at what I do now, and god knows the perks are great, but I don’t think I’ve ever felt as confident in my skills as when I was manning the POS system at that little café. I loved the way time sped up during the weekend brunch rush. I loved watching the sunrise while I opened up shop at 5:30 a.m. I loved the thrill that came from cutting the first slice out of a towering apple pie with nary a stray crumb. And I loved the people I did it with.

Which all brings me to the fact that this month marks Alcove Café’s 10-year anniversary. If you can’t tell from the last 400-some words, the occasion has me feeling a little nostalgic—and old. To celebrate the milestone Tom and the gang are launching a “10 Days of Alcove” contest, a Willy Wonka-esque giveaway complete with Golden Tickets hidden inside chocolate bars and napkin rolls. Prizes range from a box of chocolates, to a memory stick holding 10 of Alcove’s famed music mixes (might one of them be mine?), to a private cocktail class at Big Bar. The full details of each prize are below, and the contest begins July 14.

Should you decide to stop in and take your chances, there’s one thing you should keep in mind: always tip your barista.

July 14-23
• Golden Tickets given away during Alcove Café and Big Bar hours of operation.

3.  “Drinks on Me” Hero Pass (five prizes awarded)
Everyone enjoys being the Hero who buys the round for his or her friends…almost as much as everyone likes being on the receiving end.  Be the hero with a pass good for one round of cocktails plus an appetizer of your choice for you and three of your friends.

6.  Simple & Sweet – Coffee + Cake (ten prizes awarded)
The perfect prize for those with an afternoon sweet tooth, as the winner and guest will enjoy coffee or tea and slice of delicious cake

7.  Be Our Guest of Honor for Dinner and a Movie (four prizes awarded)
Delight in a table reservation for two with complimentary dinner and cocktails for the legendary Movie Night at Alcove.

10. GRAND PRIZE #2 – Dinner in the Alcove Event Cottage for 10 (one prize awarded)
You and nine friends will celebrate an event of your choice featuring dinner, cocktails and dessert in the exclusive Alcove Cottage.