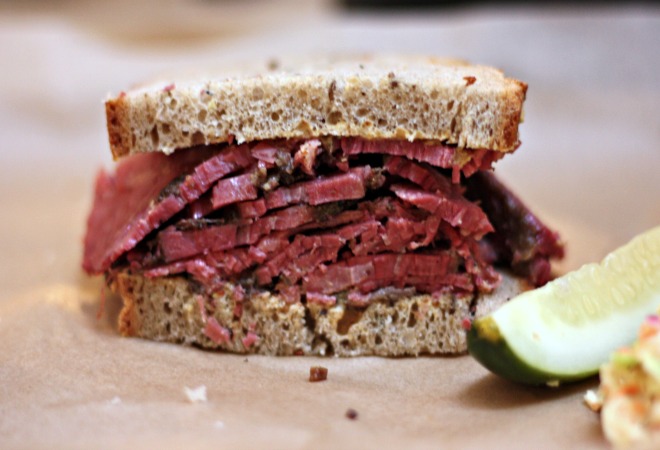 To put a spin on the famous Carl Sagan quote, if you would like to make a pastrami sandwich from scratch, you must first invent the universe.

That’s not to say that former Mezze chef Micah Wexler and his team at Wexler’s Deli are inventing the cosmos at their new-wave Jewish delicatessen inside Grand Central Market, but in deli terms they may be closer to it than anyone else in town (other than the grad students at CalTech, perhaps).

Order “The O.G.” ($10) and you’ll experience the pastrami sandwich—first brought to New York by Jewish-Romanian immigrants in the 1870s—in its purest, most elemental form: two slices of fresh-baked rye bread, house-cured and smoked pastrami, and a generous swipe of mustard. That’s all, baby.

If you have the necessary time, dedication, and—most of all—skill, you could technically recreate the sandwich using the steps below. But let’s be honest, you’re better off letting Wexler’s Deli do the work. They have egg creams and half-sours, after all.

1. Bake rye bread
Wexler had Hawthorne-based Etxea Basque Bakery prepare his own recipe for a caraway-speckled traditional Jewish rye baked on hearthstone. Baker Charlie Garacochea, whose great-grandfather immigrated from the Pyrenees to open a bakery in Venice in 1908, provides Wexler’s Deli with 10 to 15 massive six pound loaves everyday.

2. Buy whole slabs of brisket
Wexler (who uses around 150 lbs of brisket per day) orders his meat from a ranch in Colorado, where the cows are sustainably raised without hormones or antibiotics. The corn-finished meat is nicely marbled and has a snowy white cap of fat on top, which ensures the meat remains moist and flavorful.

3. Brine for three days
The trimmed brisket gets a long bath in curing salt and pickling spices. What comes out of the brine can then be steamed and turned into corned beef, which Wexler’s Deli also serves as a sandwich. But this batch is destined for the smoker.

4. Let sit for a day. Rub generously with spices
The meat is allowed to dry by sitting in the fridge for a day. This helps the coat of spices applied afterward—black pepper most prominently—to form a beautifully thick crust during the smoking.

5. Smoke for three hours
The cured and dried brisket luxuriates in a smoky sauna for three hours, officially turning it into pastrami and developing a distinctive blackened appearance.

6. Slice very carefully
Brisket cuts consist of two parts, Wexler explains, the deckle and the flat. The latter section is fattier and the former is leaner. The brisket is sliced with a very sharp knife so as to include a little bit of each. Slices are cut thick, but not too thick. You don’t want to be eating a pastrami steak, Wexler explains.

7. Spread mustard onto bread
After sampling dozens of mustards, Wexler chose Kosciusko, a spicy brown Polish mustard from Chicago. It has enough sharpness to give your sinuses a nudge without overwhelming them.