Home Uncategorized How to Get “Ahead” at Beijing Pavilion 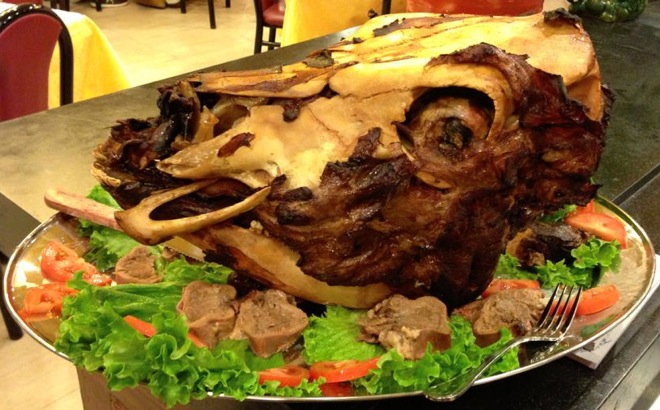 Beijing Pavilion in Rowland Heights has a picture menu that is unapologetically graphic. One of its house specials, ngau tau, may be tricky to translate even if you can read the pinyin under the photo. But the picture explains it all; ngau tau is roasted ox head. Wearing a gruesome death grin, the ox’s teeth are mostly accounted for, though its eye sockets are vacant. The entire head rests on a bed of lettuce (as if that artistic plating would soften the presentation) and will set you back $98, though it will probably feed a party of four to six. Just make sure you order it a day in advance so they can prepare it properly.

If the head of an ox is too much to commit to, then perhaps lamb spine stew is what will hit the spot. Or maybe the sheep ribs and lamb testicle skewers can offer that whole beast satisfaction. You’ll find loads of lamb on the Beijing Pavilion menu since Beijing itself is in the very frigid northern portion of China, and lamb is considered a yang (as in yin and yang) food, which is believed to be hot or warming, so it fits right in. Kicking off a meal at Beijing Pavilion with the cold pork skin jelly appetizer might be confusing to some, since it can pass for dessert… that is, if your dessert is usually made from pork collagen and bits of pig skin. As far as flavor goes, it’s a bit porky, but it leans toward the bland side; the texture is where the party’s at. Gelatinous like Jell-O, the squishy chunks of pig skin are congealed within the amber blocks like fossilized flotsam. Though a little bland, you can bring the flavor of the pork skin jelly to life by dunking it into the outrageously potent dipping sauce, a base of vinegar and soy sauce mixed with at least five cloves of raw garlic, the pungency of which will glom onto your tongue in the way barnacles cling to ships. You won’t be able to eradicate the overly attached stench from your palate for a few days, but if you love garlic, it’s completely worth it. The farmer’s style stir-fried pork is braised “five-flower pork”–a poetic Chinese expression that describes the multiple layers of alternating flesh and fat which make up pork belly—pan seared with red and green peppers, green onions, and garlic. Spicy, smoky, and full of twice-cooked fat and meat, this is one of those plates that the Chinese say makes the steamed rice go down better because it’s so flavorful.

Whatever you end up ordering, I can promise that Beijing Pavilion is absolutely a head above the rest, even if that head comes from an ox.