Home Uncategorized How to Find the Elberta, the Mother of All Peaches 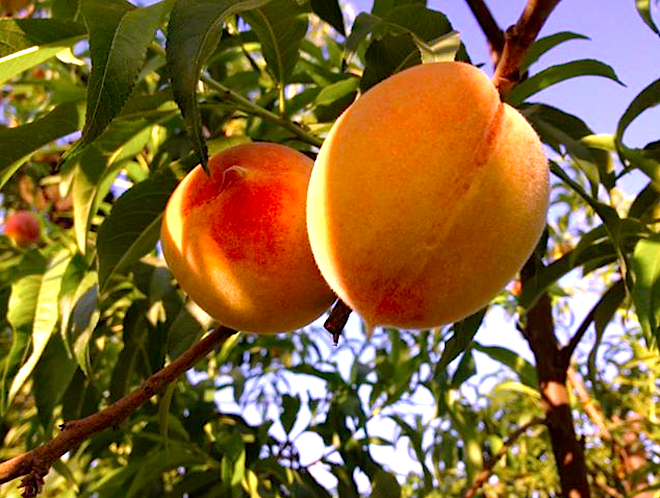 Photograph courtesy of the Masumoto Family.

The Masumoto Family’s reputation precedes them in the form of peach fuzz. They, along with a handful of other farmers around the country, are responsible for keeping key heirloom peach varieties alive. Out of a smallish (80 acre) plot in the Central Valley (about 20 miles south of Fresno), come, each year, rosy and golden globes, smelling of summer. This past June, Marcy and David Mas, along with their daughter Nikiko released a new book, The Perfect Peach: Recipes and Family Stories from the Masumoto Family Farm. In it, they tell tales among “the nuances of a life filled with peaches.” It’s a cookbook, and one filled with both savory and sweet recipes, but it’s also a story book—there are love stories and work stories and the stories of the Masumoto’s seven peach varieties. The one that caught our attention? The Elberta. Of her, they write:

“Ripens early August. This is the mother of all peaches, at least by reputation. Ask someone older than sixty and he or she might sigh when the name Elberta is mentioned, renewing fond memories. Once the nation’s most popular peach. Can be picked green and still ripen. Originally it was sold as a “wrap,” that is, tissue-thin paper was wrapped around each peach before it was placed in the packing box.”

Elbertas (not Masumoto’s, but the same variety) can be found canned at Bob’s Market in Santa Monica, though this is hardly the best way to enjoy them. Masumoto’s Elbertas are fragile creatures; they cannot be picked green like most other Elbertas. The only reason these trees have lasted on the Masumoto family farm is because of their adopt-a-tree program. Because the adopting “parents” pick the fruit themselves, the trees survive; otherwise, the oft-bruised fruit might not make it to market.

The phrase that best describes the Elberta, according to the Masumotos? “Magical peach that makes us appreciate old things.”

So, you want to adopt a tree? Try again next year! This year’s trees have all been snapped up.

The only way to get a taste of an Elberta in L.A. this year happens next week at Cliff’s Edge in Silver Lake. Masumoto Elbertas have been used to make a diverse selection of craft beers including: Lost Abbey’s Veritas 010, Veritas 011, and Box Set Track #11: “The Devil Went Down to Georgia;” The Bruery’s Sour in the Rye with Peaches; Greenhill Brewery Chat Flou!; and Hoparazzi Mission Impecheable. These beers and others will be paired with a meal and cocktails prepared by chef Vartan Abgaryan and culinary cocktail mixologist Matthew Biancaniello. The five course menu will feature Masumoto peaches and nectarines as well as the brews they’ve inspired.

The Masumoto Peach Harvest Beer Dinner takes place at Cliff’s Edge on Wednesday, August 7 at 7:30 p.m. A cocktail reception and five course meal is included in the $75 per person price. Though most of the tickets have sold out, there are a few spots left (and a waitlist, just in case of cancellations). To make a reservation, contact Cliff’s Edge ASAP at 323-666-6116.

At Mon-Li in Malibu, a “Cocktail Chef” Is Blending Bevs and Haute Cuisine