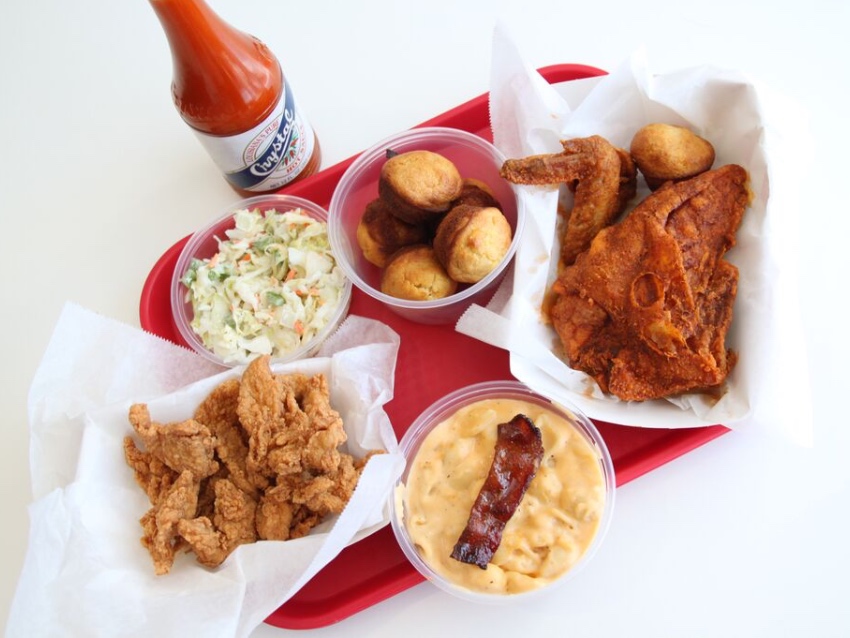 When “Major” Dave Caldwell returned from Afghanistan in 2012, after serving in the Marine Corps for 20 years, the job market was bleak. As his search for work brought few promising prospects he started to consider a less traditional route that he’d never considered before: opening a fried chicken restaurant.

“When I sat down, and I kind of thought to myself, ‘What’s in the realm of the possible, and what do I have that nobody else does?’, and the chicken was sort of it,'” says Caldwell.

The recipe at the center of Major Dave’s Chicken, which opened on Pasadena’s Hill Street a little over a year ago, was passed down from his grandmother to his father, whose way with poultry was neighborhood famous while Caldwell was growing up. Prized for being juicy on the inside and crispy on the outside, even when cold and even the next day, the chicken was something that Caldwell thought would resonate with a wider audience.

With no restaurant experience to speak of, Caldwell drew on his military skills to work out his concept. “For better or for worse,” he says, “I approach everything like a Marine.” Tasked with moving people, supplies, and machinery in the field, he used similar organizing principles to develop a multi-level business plan. “I just took it, broke the whole thing apart into component parts and figured out how to make fresh food quickly,” he says.

Major Dave’s chicken, offered in classic form or Nashville Hot style, is hand trimmed (with most of the fat cut off) and brined before it’s fried. The result is a crunchy skin with lots of flavor and not a lot of grease. The sides, which Caldwell takes a whole foods approach to, are also prepared in house. The smokey-sweet baked beans are made with bourbon, bacon, and pintos while jalapenos give his cole slaw a bit of heat. Instead of regular old mashed potatoes, Caldwell serves very creamy (thanks to the addition of cream cheese) whipped garlic cauliflower, which is his best seller. He uses Mary’s Chicken and avoids GMOs, processed ingredients, hormones, and antibiotics.

“Fried chicken is the most ordered food in America, more than burgers, more than tacos,” says Caldwell, who admires the Chipotle model and hopes that he can do with fried chicken what that company has done with the burrito in the fast-casual space. And even though he’s actually had some customer requests to put a chicken burrito on the menu, his most recent addition is a fried chicken sandwich dressed with housemade buttermilk chive dressing, pickles, and cole slaw served on a bolillo roll. He’s also toying with the idea of offering a matzo ball soup during the winter, which could be a real boon to Pasadena’s Jewish-food desert.

Today, Major Dave’s Chicken is paying respects to fellow veterans by offering a free combo meal or sandwich to those who have served. Proceeds from Veteran’s Day sales will go to a military charity. He also says that if his business ever gets to the franchising level, his dream is to make them affordable and available to veterans, who he believes are particularly well-suited for the restaurant business. “There’s a tenacity,” he says. “I wake up every morning, and it doesn’t occur to me that I can’t go in or get something done. I get here every morning and I do it again and do it again.”