Home Outdoors Gardens and Green Spaces How Does Your Garden Grow, Willie Jane? 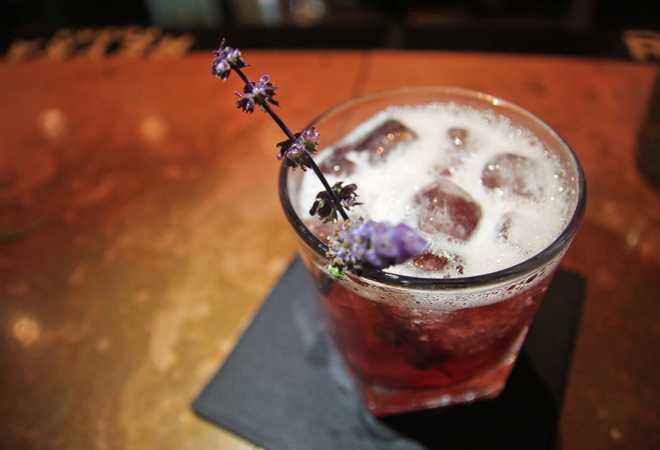 At Brad Johnson and chef Govind Armstrong’s Venice restaurant Willie Jane, fresh ingredients aren’t merely handpicked from a farmers market or foraged from the wild. Pshaw! That’s too easy. Instead they’re grown in its backyard. Cook’s Garden, an urban farm by Home Grown Edible Landscapes, occupies the lot right next door to the restaurant and grows tomatoes, herbs, cucumbers, okra, beans, squash, and lettuce to name a few, in several 4-by-8 plots for Willie Jane.

The garden, which opened this past June, has also leased boxes to Abbot Kinney restaurant neighbor Joe’s Restaurant. Other boxes are reserved for local home cooks.

Growing enough produce for a restaurant seems ambitious but Cook’s Garden owner/gardener Geri Miller makes it look easy. “We do rolling or succession planting. We plant a row one week and then two weeks later we do another row. We’re biointensive growers, meaning we grow densely but harvest aggressively so it keeps the plant artificially smaller than what you would usually grow it to.”

They also plan 90 days ahead of time. “We’re not transitioning into fall season until November. October can be a hot month and we don’t like to chance anything,” Geri said. Such a huge cushion of time also allows them to accommodate chefs or mixologists who want something that can’t be found commercially. “It gives us a chance to find the seed and propagate the plant,” Geri said.

Willie Jane mixologist Derrick Bass (formerly of Eva Restaurant) has a dedicated plot for his cocktail ingredients. “We’re growing heirloom tomatoes he may use in his Bloody Marys. We have watermelon that we’re growing vertically, like Sugar Babies and Sakata melons. A Citron Geranium he used in a vodka infusion,” said Geri. “I made it with a sweet tea simple syrup,” added Derrick.

Why wait for something to grow instead of just go to the market and pick what’s there? “This is much more customized and much more of an artistic back and forth utilizing both our skill sets to come up with something different,” said Geri. “It really takes a chef or mixologist that’s very confident. I can’t always guarantee what nature’s going to do so there may be some times when I can’t give them something and they’ll have to be able to react in the moment and make other arrangements or substitutions.”

Inspired by this new method of customizing ingredients, Derrick has learned how to pair certain herbs with specific spirits. Here’s a basic guide.

Bourbon: Basil, summer savory, fennel. “I like to make savory cocktails with bourbon. I also like well-balanced cocktails so lavender is sweet so it’s good with the ‘Coal Miner’s Daughter.’ It’s basically like a ‘Gold Rush,’ we just add ginger to it and garnish it with lavender.”

Gin: “Gin is almost good with anything. I go all over the place.” Derrick’s currently working on an infusion with dill and fennel. “Dill has that salty characteristic to it and fennel is almost licorice which goes well with gin.”

Tequila: Citrusy herbs. “Pineapple sage would be great. Anything citrus, that would complement a margarita.”

If you just have herbs lying around that you don’t know what to do with in a cocktail, Derrick recommends using it in a simple syrup. “You have hot water and you mix in the sugar, then all you do is add the herb and cover it and let it sit for as long as you want. Just use equal portions.”

What’s the Story Behind the VENICE Sign That Hangs Over the Intersection of Windward and Pacific Avenues?