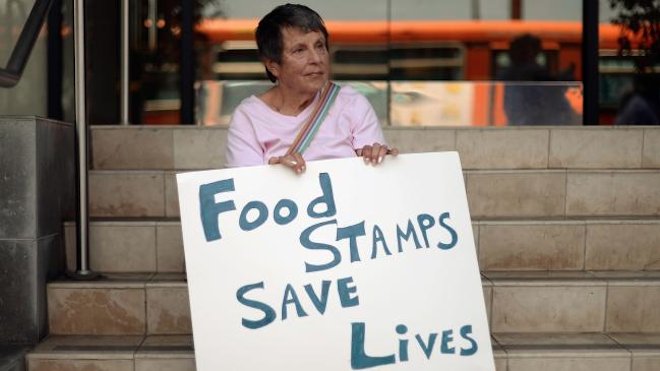 Yesterday, news broke that the GOP-dominated House won a vote on a bill aimed at severely cutting back spending on the nation’s food stamp program. The bill, written under the direction of House majority leader, Eric Cantor (R-Virginia), would cut $40 billion from the goverment aid program over the next 10 years. Through a series of new requirements from applicants, the bill would bar many current recipients from qualifying for aid and would limit the amount of time aid would be given to each individual recipient.

Though the bill looks like it won’t pass through the Senate, it’s hard to understand why Republicans would see the passing of this bill as a victory. Many of them represent counties that receive much of the nation’s food stamp aid. And it’s not as though they’re going hungry. Democratic Representative Jackie Speier took to the floor to point out a bit of Republican hypocrisy. In her speech, Speier revealed that the same Republicans who voted to cut food stamp aid often spent nearly $200 per day on food when traveling for work.

Drilling down to L.A. county, the numbers—including recent census data—speak for themselves.

See also the government’s explaination of the poverty rate.