Home Books Hot Out of the Oven: Fall’s Most Anticipated Cookbooks 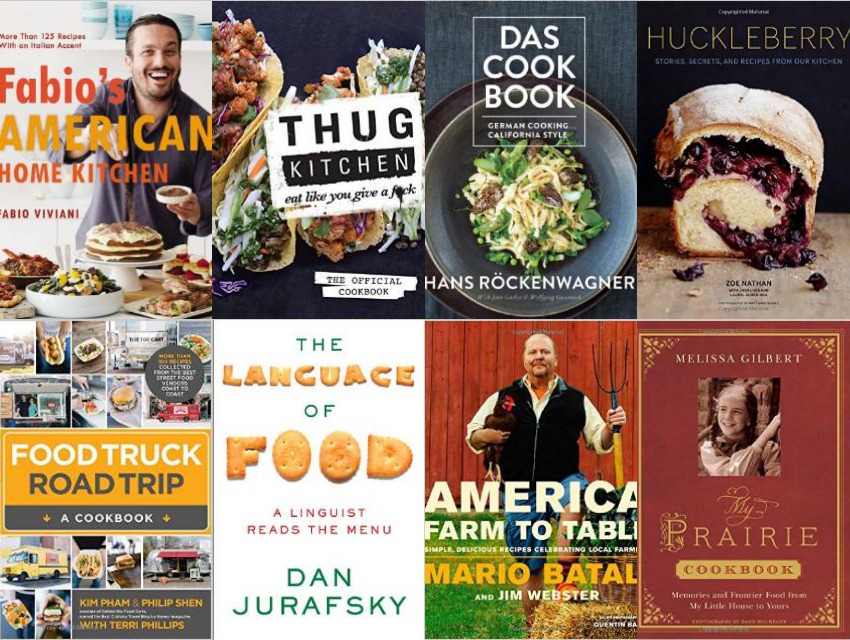 Das Cookbook: German Cooking…California Style
(Prospect Park Books, $30)
By Hans Rockenwagner, Jenn Garbee, and Wolfgang Gussmack
“I’m still glowing,” says Hans Röckenwagner, the man behind the 29-year-old Röckenwagner café and bakery franchise. He could be flushed with pride over the release of Das Cookbook: German Cooking…California Style, one of this fall’s most anticipated recipe collections. But no—his glow can be attributed to Germany’s 2014 World Cup victory, which the chef hasn’t stopped celebrating. The win was well timed for Röckenwagner. His second cookbook showcases the misunderstood cuisine of his homeland. “People think it’s heavy,” he says. “That reputation is going to take a while to dispel.” To speed things along, Das Cookbook presents California-inspired riffs on Deutsch recipes like herbed gravlax and spring spaetzle with herbs and peas. “But bread is hugely important in Germany,” says Röckenwagner, so the most riveting chapters focus on the wonderful sourdoughs, ryes, and yes, pretzels that one associates with the Saxon kitchen.
Out: October 14

Huckleberry: Stories, Secrets, and Recipes from Our Kitchen
(Chronicle Books, $35)
By Zoe Nathan and Josh Loeb
Baked goods are also at the heart of Huckleberry: Stories, Secrets, and Recipes from Our Kitchen. Zoe Nathan and Josh Loeb’s Santa Monica café is but one of the husband-and-wife team’s cluster of successful restaurants, which includes Rustic Canyon and Milo & Olive. For Nathan, Huckleberry most deserved to have its treats immortalized in print. “It wasmy first real place—it’s my baby,” she says. “These recipes are the ones that now, as a mother, I find myself making for play dates and after swim class.” We’d like to get in on a play date furnished with sugar-dusted tea cakes, crisps and cobblers bulging with seasonal fruits, and enough pancakes to put IHOP out of business. “I think testing these recipes ruined my son for pancakes,” says Nathan. “But I’m the kind of person who will make pancakes for dinner, get everyone to sleep, and get back to work baking.”
Out: September 9

My Prairie Cookbook: Memories and Frontier Food from My Little House to Yours
(Stewart, Tabori and Chang, $25)
By Melissa Gilbert
Melissa Gilbert, child star of the classic sitcom Little House on the Prairie, shares over 80 homestyle recipes inspired by the show’s fictional restaurant, Nellie’s. With favorites like pot roast, fried chicken, apple pie, corn bread and more, you can finally eat like a member of the Ingalls family—without enduring the frontier hardship.
Out: September 16

Fabio’s American Home Kitchen: More Than 125 Recipes With an Italian Accent
(Hyperion)
By Fabio Viviani
The former Top Chef  star and L.A. restauranteur is back with this third cookbook, which focuses on the Italian-inflected recipes that he cooks for family and friends. Most dishes are tailored to feed a crowd with ingredients found in any local supermarket, meaning you’ll sharing Viviani’s comfort food is easier than ever.
Out: October 21

America Farm to Table: Simple, Delicious Recipes Celebrating Local Farmers
(Grand Central Life & Style)
By Mario Batali
For his latest cookbook, chef and food personality Mario Batali reached out to his celebrity chef friends across the country to find out about their favorite farmers and their stories. The result is a look at some of the countries best produce and products, with recipes that will inspire you during your next farmers’ market visit.
Out: October 7

Thug Kitchen: The Official Cookbook: Eat Like You Give a F*ck
(Rodale, $25)
The hit Tumblr blog has been turned into a full-service cookbook, dedicated to showing you how to cook a bomb-ass meal of roasted beer and lime cauliflower tacos or pumpkin chili at home served with a heaping side of attitude. This book aims to be an invitation to anyone who wants to elevate their kitchen game, and in the words of the author, “sh*t’s about to get real.”
Out: October 7

Food Truck Road Trip—A Cookbook: More Than 100 Recipes Collected from the Best Street Food Vendors Coast to Coast
(Page Street Publishing, $22)
By Kim Pham, Philip Shen, and Terri Phillips
After spanning the nation sampling some of best new-wave food trucks and carts in the 50 states, the authors of BehindtheFoodCarts.com compiled some of their favorite recipes, which range from prosciutto and grape pizza from L.A. Urban Oven to pad Thai tacos from The Peached Tortilla in Austin.
Out: November 4