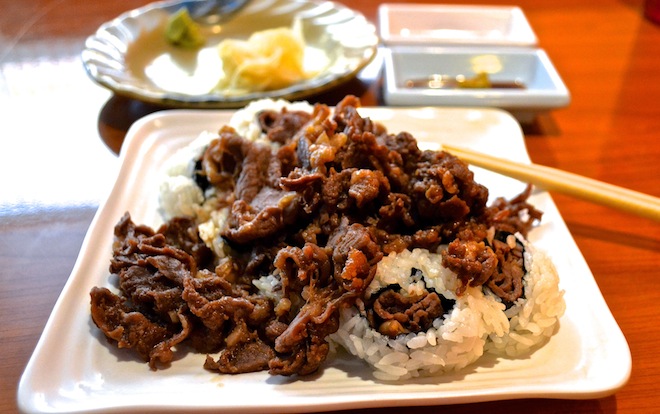 There’s a reason why the bulgogi roll is one of the most popular rolls at Yamaha Sushi in Northridge. The students at nearby Cal State Northridge represent a large chunk of Yamaha Sushi’s clientele. Which shouldn’t come as much of a surprise: The plate of rice and meat all rolled up is something any hungry kid with limited resources might concoct.

Likely a close cousin to the famous Kogi bulgogi taco, Yamaha Sushi’s bulgogi roll is what you would expect: thin succulent slices of grilled beef that have been marinated in a base of soy sauce, sesame oil, and sugar and then rolled in nori and sushi rice.

If that wasn’t enough, all of the bulgogi rolls are then smothered with more bulgogi. It’s bulgogi on bulgogi.

Interestingly, a dab of wasabi and a heap of gari, or sushi ginger, come with the bulgogi rolls. Initially, these traditional sushi condiments seem out of place next to a grilled beef roll. But do try them. The wasabi sauce brightens up the all of the rich beef.

You could put bulgogi on pretty much anything and it’d make the thing better. Will the next pastry hybrid involve bulgogi stuffed inside a croissant? A crogogi? Has a ring to it.