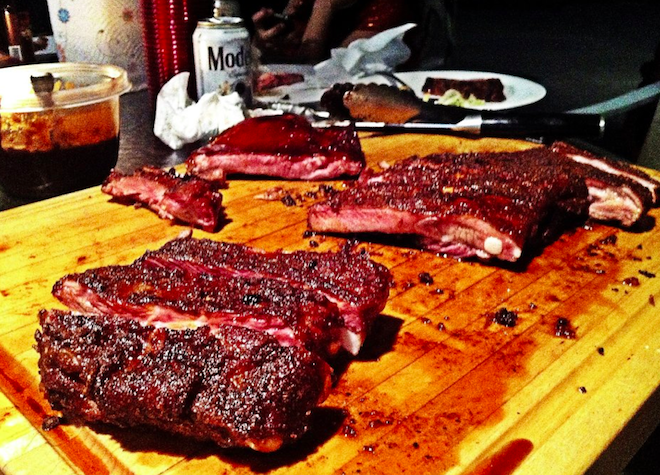 Wade McElroy, Russell Malixi, and Max Ian have never opened a restaurant together before. And though Wade owned and operated several coffee shops in Austin, only Max has cooked professionally. Plus—and this is important—the three guys had never made classic Texas-style barbecue before last year. But none of this is stopping the trio from opening Horse Thief, a barbecue joint named after a character in a Larry McMurtry novel, this Thursday, July 4.

“I had this idea a couple of years ago, when I saw a bunch of younger guys, mainly in Brooklyn and Austin, start these really good barbecue joints. And being from Texas, it made me think about whether I could do it too. I had always thought that to make good barbecue, your name needs to be, like, ‘Bob Good ol’Boy’ or something. I didn’t realize that it was a skill that could be learned,” says McElroy, who soon after recruited his childhood friend Russell to help develop the concept. “And last year, after we had gotten some recipes down, we realized that we needed more kitchen muscle, so we brought on Max, who had been working at Little Dom’s.”

“It’s taken us over a year, but we finally have a product we’re proud of,” says McElroy. The partners invested in an antique smoker and grill, which is now stationed at their stall in Grand Central Market. Their menu of classics includes brisket, pork spare ribs, and chicken; they’re also working on pork belly. A line of side dishes is meant to honor SoCal’s bounty. Fennel-apple slaw, a butter salad with blue cheese and bacon, and their take on creamed corn will be on offer in addition to a vegan option, heirloom baked beans. (“If you haven’t had an heirloom bean, you haven’t had a bean.”) Two desserts finish off the simple menu: a banana pudding and a drop biscuit cobbler, made from whatever is in season each week.

The magazine’s Dine editor, Lesley Bargar Suter, attended an event last week that was catered by Horse Thief. She tells us that though she doesn’t think anyone in L.A. has pulled off true Texas-style ‘cue, Horse Thief is “as moist and flavorful as anything else we’ve got … The ribs achieved that great sweet spot between tender and meaty—you could easily pull off a hunk, but you know, teeth need to be involved. Everything was shot all the way through with smoke but it wasn’t overwhelming … The best of the sides was the mac n’ cheese. When Sherry Yard (who was also at the event) leans over the table to yell, ‘This is incredible mac n’ cheese!’ you know it’s good.”

Horse Thief has applied for a beer and wine license, and though they will only be open for lunch starting this Thursday at 11, the group hopes to eventually be open seven days a week and until late in the night. After all, that’s when the best curing, smoking, and barbecuing begins.