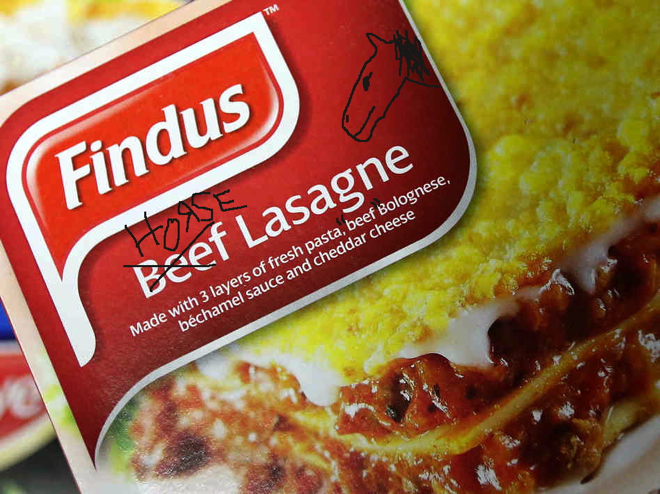 Europeans are up in arms after traces of horse meat were found in burgers, frozen lasagna, and other products labeled “100% beef.” Reasons for the mix-up range from elaborate mafia schemes to a story that claims a newly enforced Romanian law that prohibits horse-drawn carriages on roads is what sent “hundreds of thousands” of equines to the slaughterhouse, where they were allegedly labeled as beef so as to not waste the meat… or potential profits. (Another report charges that there’s probably some donkey meat in the mix too.)

Sure, it’s appalling that someone could mix something up so bad (whether intentionally to defraud customers or unintentionally due to negligence) that it spread across multiple countries, affecting major suppliers such as Tesco and Burger King in France, Sweden, and the UK. But as the number of folks on our side of the pond reacted with an uproar of imaginative cries such as “Ewwwww!” and “Awwwwww… poor horsies!” … I had to revisit the double standard that lets many people be completely OK with eating cows, but thoroughly appalled at the thought of eating horses.

As Jonathan Safran Foer examines in his tome, Eating Animals:

“The French, who love their dogs, sometimes eat their horses.

The Spanish, who love their horses, sometimes eat their cows.

The Indians, who love their cows, sometimes eat their dogs.

While written in a much different context, George Orwell’s words (from Animal Farm) apply here: ‘All animals are equal, but some animals are more equal than others.'”

So, what does it matter? What makes eating a certain animal socially acceptable, while others get a proverbial “get out of jail free” card? Even before I became a vegetarian a few years back, I could never think to eat, say, a dog or a cat. Although as Mr. Foer also points out, we do in fact eat them all the time, albeit a tad indirectly. You see, tens of thousands of our feline and canine friends are euthanized in L.A. animal shelters every year, and they’re sent to the big, smelly rendering plant in Vernon, where they’re cooked and broken down, separated into fat, protein, etc., and turned into all kinds of products, such as soap, cosmetics, pharmaceuticals, gelatin, annnnnd agricultural feed. Yep… sweet little Fido could very well turn up in your food’s food.

So what’s the beef with eating a little pony now and then? And why does donkey consumption prove to be an ethical burden for so many? Beyond illogical excuses and ad hominem reasoning, I can’t see why anyone can be OK with eating one animal and not another. Just my opinion to be sure, but I’m hoping it gives you a little food for thought.