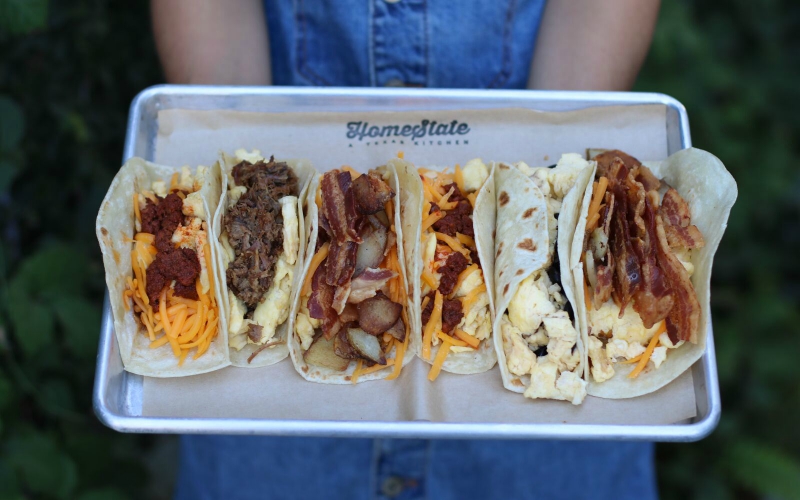 Since chef-owner Briana Valdez opened HomeState in 2013, the Texas-style breakfast taco spot has become a morning-to-afternoon staple. During brunch hours on a typical weekend, a line spills out the door and down the sidewalk along a stretch of Hollywood Boulevard in Los Feliz. Angelenos queue up for queso, Mexican migas, and, of course, the restaurant’s signature breakfast tacos, wrapped in warm, perfectly pliable flour tortillas.

But what’s kept Valdez especially busy the past few months is that HomeState is expanding to a second location in Highland Park, along a stretch of Figueroa that’s quickly transformed over the last two years. “I live and work in Highland Park,” Valdez says. “In L.A., it’s few and far between to feel welcomed and acknowledged somewhere. It was important for me to bring that feeling to the neighborhood. It’s why we have the large ‘Welcome Home’ sign up.”

Fans of HomeState’s Los Feliz location will find the new space—which officially opens on Monday, March 19—familiar. The food menu features all the favorites, and a drink menu has been added to accommodate the all-day hours (the restaurant will be open until 10 p.m.). Expect beer, liquor, and margaritas designed by former République wine director (and Valdez’s husband), Taylor Parsons. However, a large outdoor dining area may prove to be the new location’s most popular trait. There’s about 1,000 square feet of patio seating with string lights dangling overhead, a setting that begs for a lazy summer evening.

“We’re keeping the same feeling,” Valdez explains. Even the walls at the Highland Park location are painted the same blue you’ll find inside the Los Feliz location. “I call it Austin Blue,” she adds. “It’s from one of my favorite restaurants in Austin. I called them to find the paint.”

RELATED: This Might Be the Most Inventive Breakfast Burrito in L.A.