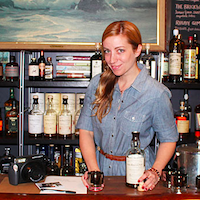 The other night, Rachel Furman, bartender and national brand ambassador for Art in the Age, was talking to her girlfriends about a recent date. She and her prospective suitor had gone to a bar, but since the lighting and music were horrible, she ended up taking him to her favorite whiskey bar in all of L.A., maybe the world, instead… at her apartment. “Smoke & Honey” is Furman’s bar inside her Los Feliz studio apartment, where there’s perfect (read: flattering) lighting, a turn table with a stack of records, and all her favorite scotch. What better way to spend the wee hours of the morning?

When she first moved into her Los Feliz abode, Rachel was conflicted over creating a dining room or outfitting the space as a bar. “I was just thinking of what I wanted to have happen here and what I want to use the space for. But the opportunity to have some people over for drinks, it’s a little bit more casual, and I felt like it would [encourage me to entertain] more.”

Her home bar, which she says doubles as an office, is composed of three major components: two red bar stools (which she claimed from her grandmother’s basement), a quilted vintage bar she nabbed up for a mere $100 from a thrift store in Philadelphia, and a shelf stocked with her favorite booze.

Even though you’d think her enviable liquor collection, which includes the impossible-to-find Balvenie Tun 1401 Batch 9, would steal the show, it’s all about the knickknacks: that ‘70s painting of a stormy sea, the glass cake platter for cigars and cigarettes, a guest sign-in book filled with Polaroids of past guests, and the Sailor Jerry ship’s wheel plaque she got on her last day working for the brand. “I think the key to a good bar… good drinks are just one small part of it. There has to be good lighting, good music, and then something to talk about,” says Rachel.

She would never open her own bar—“I don’t want the stress of it”—but she loves to play pretend. “I definitely geek out on it and write my drink specials on a chalkboard for the day. I’ll even write up a menu and print it out.”

NAME |  Smoke & Honey Whiskey Bar.
“Smoke and honey is what I love most in a scotch. I love the flavor notes and just think it’s a fun balance. Smoke is the bad-ass side and honey is the homemaker side, so I thought it was fitting for my home bar.”

THEME | ‘60s and ‘70s.
“I think I was born in the wrong era. I was meant to be a ‘60s housewife and somehow I ended up here. I really love entertaining and making guests feel special and welcomed. The ‘60s and ‘70s was a time of having people over, entertaining. It’s very Mad Men style.”

INSPIRATION |  The L.A. Athletic Club.
“I love how they combine old antiques and nostalgia pieces (like an old racquet) with modern design (like houndstooth chairs and kitschy pillows) and simple, classic cocktails. I want my home bar to feel upscale but old at the same time. And do you see the record player and the records above it? Well at El Prado, across from the Echo, the bartenders will play records while they’re bartending. It’s so different from just sticking your iPod in. I really love the style of El Dorado down in San Diego. They have a huge boar head or something on the wall, and just a little bit of that retro-’70s style.”

MUSIC | Jimi Hendrix, ‘70s soul and funk, garage rock for hanging out at the bar, and big band and swing when the girls are over for champagne.
“Pandora’s Old Delta Blues is the best.”

INVENTORY | Whiskey
“Seven Grand is one of my biggest inspirations. They have such an amazing whiskey collection. So I have a lot of bourbon, a lot of whiskey, a lot of scotch. Obviously my favorite is Balvenie. The other thing I’ve just been really into lately is liqueurs and amaros.”

COCKTAIL DU JOUR | Sage White Negronis
“I had a couple of girlfriends over last night and I was making Sage White Negronis with equal parts Sage, Suze, and Lillet Blanc. Just put an orange peel in it. It was easy and I didn’t have to squeeze any limes or lemons.”

CROWN JEWEL | A William Grant & Sons special release
“I have some scotches that I will open and drink and others that I’m trying to save, but it’s really hard to. William Grant & Sons did a special release for the matriarch of the William Grant family. Her name was Janet Sheed Roberts and she lived to be 110. She was the oldest woman in all of Scotland. When she passed away they did this commemorative bottle and made a special logo that was a dog and the slippers that she always used to wear. It’s a fun conversation piece. Especially if people are coming over and drinking scotch, it’s fun to just talk about some of these cooler bottles.”

SOURCES | Vintage
“You can find anything from the Goodwill to Barkeeper. Barkeeper has really nice stuff that they went treasure hunting for, so they’ve done the work for you. But I find a lot of my stuff on eBay, which is the best place to look. But in L.A. there are so many prop places selling vintage stuff for movies that you can find some gems. There’s also Craigslist if you’re looking for furniture like bar stools and bars.”