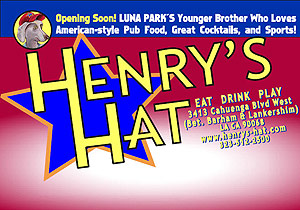 There’s a new sports bar in the works from Luna Park owner AJ Gilbert. Henry’s Hat is scheduled to open next week in the old Minibar space in Studio City, boasting 16 televisions, including one 5’x5’ projection screen. Drinks—which will include some from the Luna Park cocktail menu, and at least one “fishbowl” option—will be poured by none other than Days of Our Lives star Martha Madison (yeah, I don’t know either…), who is a co-owner of the project and, apparently, has some actual cocktail cred (she worked with Julie Reiner in New York). Edibles will include everything from pizza or potato skins made with “seasonal ingredients” to a vegan cassoulet. Customers will be able to vote online for what game’s on the big screen on any particular night, and nerds can grab a game of chess, Jenga, or Connect 4 (ok, I do love that one) and play on the “flea-market coffee table.”

With Universal CityWalk across the street—essentially, one giant sports bar—we’ll see how this does. Of course, if I could find a reason to avoid Universal Citywalk at any time, I would. And Luna Park has managed to hang in there thanks to some creative gimmicks. (Rotating promotions are always fun, at least. Right now there’s a blue plate special served on, well, a blue plate and an all-chocolate brunch offered on Sundays.) Sounds like we can expect the same here.