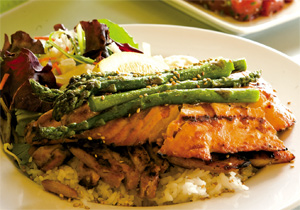 The recent explosion of Hawaiian barbecue takeout joints—with their sweet-salty mix of Japanese, Korean, Chinese, and Polynesian tastes—now means we’e never more than a few traffic lights from a combo barbecue plate or a helping of kalua pork. Chains like L&L Hawaiian barbecue and Ono Hawaiian BBQ offer the usual suspects: marinated grilled meats with scoops of rice and macaroni salad on the side. But we love these smaller outposts where the recipes are handed-down family favorites and the sunny island flavors shine bright.

In the Hawaiian patois, huli huli means “turn turn.” For many the term is synonymous with the tangy rotisserie chicken cooked alfresco at church picnics, fund-raisers, and carnivals. For the last several years Eugene Hong and his family have carried out the huli huli tradition at farmers’ markets, roasting their birds over mesquite-like kiawe charcoal. At their new, more permanent digs in the former Chow Fun Café space, they have added fusion dishes such as grilled chicken in a guava-chili sauce. » 686 N. Spring St., Chinatown, 213-626-1678.

Korea’s influence on Hawaiian cooking comes through at this family-run spot. Wiki Wiki noodle stir-fry (aka Korean chap chae) comes loaded with meat and vegetables. Bibimbap—your choice of brown or white rice topped with barbecued pork, chicken, beef, or tofu and an array of veggies—is stirred with a sweet-hot chili sauce. The beef short ribs and spicy pork ribs are juicy, and the “Supah” salad topped with grilled chicken is absolutely ono (Hawaiian for “delicious”). For dessert, the shave ices are da kine (“the best”). » 11269 Ventura Blvd., Studio City, 818-508-3192.