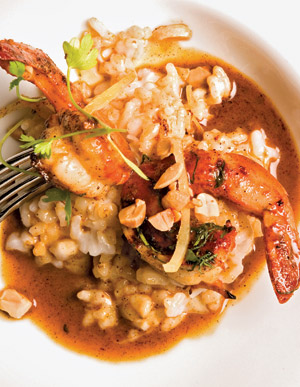 If moving didn’t have the potential to threaten friendships, ruin marriages, and deplete bank accounts, we’d do it all the time. What feels fresher and more full of promise than a new address? That stuff you’ve been talking about throwing out for years—well, you just did. For restaurants, matters are more fraught. Their identity is tied to their neighborhood; getting new digs can either reenergize or come across as an extreme course of action to revive a withering business. Spago shed its ’80s veneer when it hopped from Sunset Boulevard to Canon Drive. But transplanting Chasen’s to that same street from the edge of Beverly Hills was a nail in the institution’s coffin.

Quinn and Karen Hatfield didn’t have to throw out much when they recently traded their place on Beverly Boulevard for a giant space on Melrose Avenue. Only open three years, their original location was a cubbyhole—a handful of tables fanning out from the cramped bar and a kitchen that could double as a pincushion. Everything about the husband-and-wife team hinted at broader ambitions. Their combined résumés are filled with names like Jean-Georges Vongerichten and David Bouley, and their delicately crafted presentations seemed to exceed the bounds of a restaurant whose confining patio looked like that of a Palms apartment.

I tend to eat more slowly when something is really good, and at the first Hatfield’s I remember eating at a crawl. I didn’t want to miss how the cantaloupe froth heightened the flavors of the Dungeness crab salad, or how the buttered brioche amplified the lushness of sashimi and prosciutto in the croque madame. The desserts, which Karen would prepare before changing into dressy clothes to run the dining room, matched Quinn’s minutely calibrated handiwork. The way the buttery phyllo wafers crackled to reveal wisps of mascarpone dotted with summery berries was a feat of brilliance. This was a lot of focus to keep compressed under the roof of what was formerly a modest neighborhood Chinese joint.

Though I understand that the Hatfields required room to grow, that more square feet would allow them to better define themselves as cooks, I admit to having experienced a twinge of apprehension when I heard where they were headed. Is there an L.A. address more capable of inspiring fear in the hearts of chefs than 6703 Melrose Avenue? This was the place that saw the demise of Citrus, Alex, Meson G, and Red Pearl Kitchen in the span of nine years. Chefs like Michel Richard and Tim Goodell failed here; concepts such as nouveau California, neoclassic French, tapas, and pan-Asian small bites came to sorry ends. If restaurants are about dreams, the corner of Melrose and Citrus is where they go to die.

You need only approach the structure to see how it could exert an irresistible pull. Low slung and sharp edged, its white exterior interrupted by a sectioned window, the spot epitomizes shiny L.A. sexiness. Replace the kitchen with a pool and it could pass for the backdrop of a Hockney painting. But the footprint is massive, requiring restaurateurs to rope in droves of clients to stay viable. Designer Alexis Readinger has fashioned what must be one of the most calming environments in the city. Olive green banquettes wrap around the main room, mirroring each other on either side of a tweed-covered central divider. Monochrome murals of wheat and corn stretch across one wall, and an oversize honeycomb light fixture hangs from the ceiling. The light is so soft and the palette so subdued that together with the attentive service, the restaurant is an invitation to savor the moment. This stab at taming the 6703 monster seems to have done the job. Finally it is as intimate as it is vast.

Nothing makes me more wary of what to expect at a meal than hearing a waiter say the chef changes the offerings nightly. To me, all that means is customers will be funding the chef’s little experiment with different cuisines. Frankly I prefer sure-handedness to that kind of sloppy creativity, and Quinn Hatfield is nothing if not sure-handed. Still, although I’ve long admired his cooking—discreet but assuredly not polite—he seemed to have settled into a routine. The menu began to feel static. Such is the danger of prizing consistency and precision in your food. When a kitchen crew gets the dishes down cold, that is often achievement enough.

Maybe it’s the roomier kitchen, maybe it’s the thrill of moving, but Hatfield’s new menu sparkles with originality. There’s a multitude of grains. There’s joy in the sear. There are inventive sauces. In the sautéed foie gras, the gingerbread streusel that crowns the sliced lobe helps magnify the earthiness of the lentils on which it rests. Those strips of buckwheat crisp add something Nordic to the beet-cured fluke. Another appetizer, the warm cuttlefish salad with maitake mushrooms, derives its power from the two main ingredients being cut the same size so that notes of ocean and forest balance out each other.

Tonal control is the signature characteristic of Quinn Hatfield’s cooking. He has a way of weaving together ingredients to produce exceedingly subtle gradations of flavor. He’s also displaying a newfound forcefulness. A casserole of prawns à la plancha with Basque piment d’Espelette packs the char and spice of the most robust rustic dishes. With the buttermilk-steamed chicken breast, he goes in the opposite direction. The flesh is almost creamy from slow cooking, while chanterelles and a tarragon emulsion provide an understated accent. The chicken sits atop a bed of brothy Japanese pearl barley, which, believe it or not, is one of Quinn’s most significant innovations. At his old restaurant he relied on purees—often of potato—to get starch on the plate. Now he’s branching out. Whether it’s the velvety groats bulging from the oat crepe in the wild mushroom cannelloni (part of the $49 prix fixe vegetarian menu) or the potato gratin that sweetens the Tasmanian trout, his dishes seem entirely individual. There are still purees, but they’re no longer dominant; they have a purpose. A smoked potato version brings out the gaminess of the horseradish-juiced short ribs, while a chive-flecked potato puree airily contrasts with the rich date-and-mint-crusted lamb, whose herbal pop is more Marrakech than Montparnasse.

Quinn Hatfield’s dishes aren’t based on any one cuisine; they’re straight from his head. Karen’s desserts are those of a classicist. Lime cream pie, coconut custard macaroon, brioche bread pudding—her creations exist in the domain of the everyday. But a meticulousness is apparent in each microthin layer of crust, whether it’s the gingersnap base of the lime cream pie, the cinnamon toast chip on the bread pudding, or the lozenge of macaroon on the coconut custard. That skill even translates to ice creams and sorbets. They are presented as cute miniature scoops, but their flavors are intense. The Lillet grapefruit sorbet has an urbane sharpness—in a long meal, it could serve as a palate cleanser. The concentrated flavor of the maple syrup ice cream evokes a frosty sugaring season in Vermont.

On the dessert list general manager and sommelier Peter Birmingham recommends the boilermaker to accompany the chocolate mousse napoleon with affogato parfait. The drink is a diabolically good remake in which port stands in for the shot of whiskey and Old Rasputin stout for the beer back that washes it down. It is an incredible combination, the purity of the cacao framed by the roast of the black beer’s malt. Birmingham, who worked at Norman’s during its brief stint on Sunset Boulevard, is keenly aware of the fine transitions of the Hatfields’ cooking. He hasn’t simply come up with a great wine list; he has come up with a complementary one. The list ranges around the wine world, delighting in unsung whites and shading toward aromatic reds, such as a $45 Monthelie burgundy from Roland Thevenin. All is nuance.

I feel a bit nostalgic when I eat here, because I can’t help thinking about the wonderful little restaurant on Beverly. But the Hatfields needed to move on. Their talent demanded it. At the end of one meal on Melrose, I had the spice-dusted beignets with a glass of ten-year-old Madeira. It was a perfect pairing, each working an angle on sweetness. The beignets were warm and cloudlike; the Madeira was rounded by cellaring. At one table a mother and teenage son sat talking, while across the room a group passed around a Dark and Stormy cocktail, sampling its fizzy kick. In the glass-walled kitchen, Quinn was surrounded by copper pots and cooks in high toques. On the dining room floor, Karen strolled between the tables, a trace of a smile occasionally taking hold of her lips.