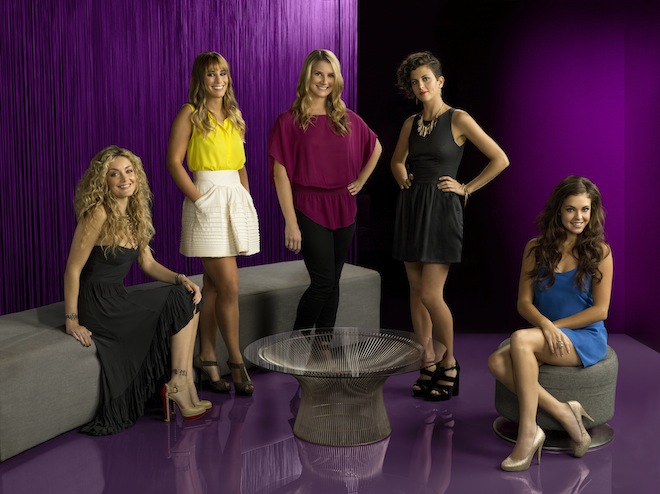 “If Kat Odell gets her own show, I’m never watching T.V. again.” Those words were once uttered by the head of a small public relations firm in L.A., and someone Odell deals with on a regular basis. And now, maybe one less person is going to be watching television (cue tiny violin), because Eat, Drink, Love is a new show on Bravo, set to air this August, that follows Odell and four other women (pastry chef Waylynn Lucas, publicist Brenda Urban, events manager Jessica Miller, and private chef Nina Clemente) who work in food in L.A.

The rumor mill has been working hard on this show, insinuating scandal and dishing out plenty of snark—but it’s nothing Kat Odell isn’t familiar with already. As the editor of Eater L.A., Odell has made a career out of hearsay and gossip. Rumors of mixing business with pleasure? Shallow attitudes and silly blog comments? That’s peanuts.

Since [full disclosure] I used to work at Eater L.A., I wanted to ask Kat about the show directly. Here is what one of the stars of a new reality show has to say to all the haters.

First, some background: why did you want a show?
I always wanted to have my own cooking show on T.V. I’ve been cooking my whole life, and I never even considered getting into reality. But in the past few years, I’ve taken on new interests and have other ideas of where my career can go, and an opportunity for a reality show came, so I took it.

It’s reality TV, but do you think it portrays the L.A. food scene realistically?
I do, I do think it portrays the L.A. food scene realistically. We have tons of really talented L.A. chefs that make appearances. What’s really cool that’s different about this show is that with or without cameras, we are just living our lives and doing our jobs. We are all successful in our own lives. So it’s showing our lives as they really are; it’s just that this time around cameras follow us.

So who’s on the show besides the five of you?
Well, you can see chef Chris Crary (Top Chef Season 9) in the early teaser. We have Eric Greenspan who just closed The Foundry but is opening up Greenspan’s Grilled Cheese, we have John Terzian of h.wood group, Bootsy Bellows, and Shorebar and, actually he’s opening a new place on Beverly super soon.

The plot of the show has you dating chefs—in what way is this empowering? Or, in what way does the show empower young women to succeed in a male dominated field?The content of this show centers around our personal and professional life. First and foremost this is a series about successful women in a male dominated field. Of course there is drama because why else would you watch? The premise is not us dating chefs. I hope that we will inspire other females to enter this space.

Based on the preview alone, it looks like you guys do a lot of drinking and not much else…? Are you concerned at all about people taking you seriously after the show airs?
No, no, because the reason we’re on the show to begin with is that we’ve reached a certain point in our careers. We’re not The Real Housewives of Beverly Hills, or just a bunch of rich people. We have already established ourselves in the food business in L.A. I think the reason there is a show, and that we’re on it, speaks for itself.

Spoiler question: Based on the preview clip, everyone wants to know—does Waylynn get married?
You’ll have to watch to find out…

You have detractors, as an editor at Eater and a star in a reality show. What would you say to those people?
People within the food industry miss the fact that Eater isn’t a site to promote restaurants. The nature of my job is to share the positive and the negative and anything that goes along with the life of the restaurant.

On a personal level, you’re not going to be able to appeal to everyone. There’s always people that aren’t going to like something, about me or the way I work … I think because of the nature of my job, it just comes with the territory.

The Cast of There Goes the Motherhood, Ranked by How Much We Wish They Had Been Our Moms