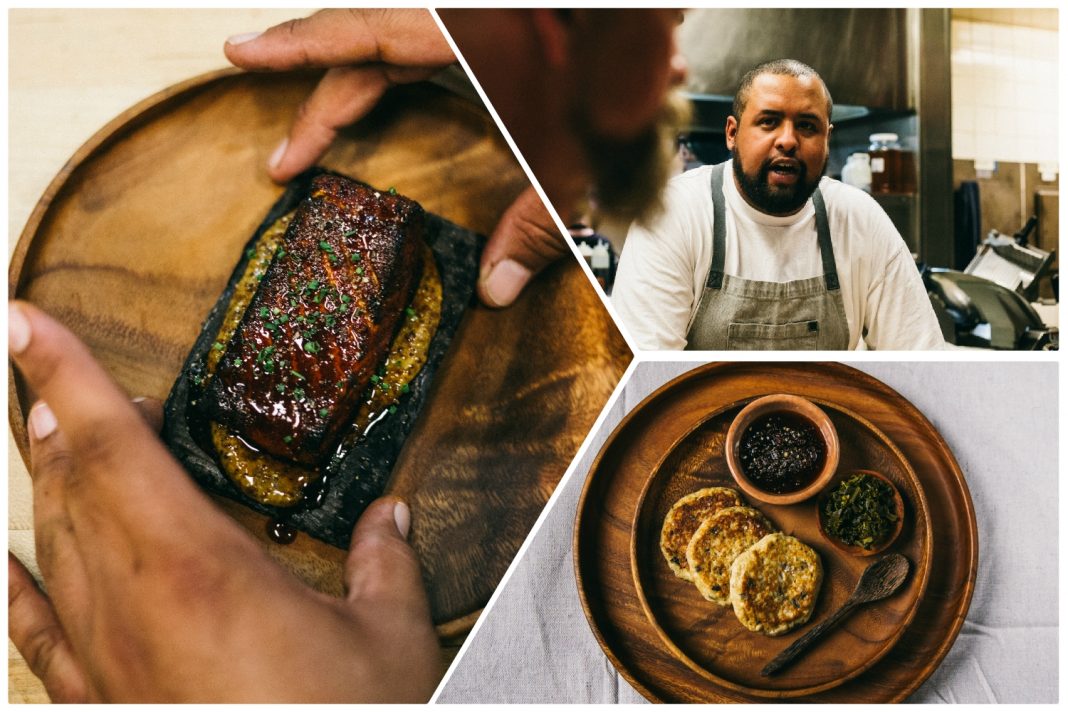 In the late 18th century, Hercules Ceaser and James Hemings were among America’s first celebrity chefs. They were also enslaved, property of America’s first and third presidents, respectively. Hemings (you may have heard of his sister Sally) was forced to work in Thomas Jeffersons kitchen while Hercules (widely known by his first name) labored for George Washington. Hercules would be the first black man to work in the president’s house, and Hemings the first to cook in a foreign embassy.

This month, Hatchet Hall in Culver City resurrected its Fuss & Feathers dining series, in which chefs highlight ingredients and cooking techniques of the early American South, to honor Hemings and Hercules. Collaborators Chef Brian Dunsmoor and Chef de Cuisine Martin Draluck weren’t able to work from recipes the men created because, like much of the history of black slaves, they’ve been lost to time. So the chefs worked from what they did know.

Hemings and Hercules worked in a style that brought together the best of both French and Southern cooking. Draluck explains, “The French-Virginian style was taking the skills and techniques of delicate classic French cooking, and fusing it with the available Virginia ingredients of the time. Giving you things like crawfish mac and cheese, or smothered catfish.”

Creating a historically speculative menu took time, research, and an understanding of the period. The Hatchet Hall team does as much as it can without using modern kitchen equipment, and most things are cooked on a wood-fire stove. When asked what dish on the menu best represents French-Virginia cooking, Draluck highlights a chicken leg, deboned, stuffed with country ham dressing, then rolled, wrapped in chicken skin, and confited until the skin is completely crispy. The dish is finished with a cream sauce made with artichoke hearts, chestnuts, and sherry. Cooking like Hemings and Hercules takes seasonal ingredients and a mastery of French techniques.

In order to have his freedom, Hemings was required by Jefferson to teach his kitchen staff all of his favorite recipes. Hercules, on the other hand, had to escape to be free. There are, of course, countless other plantation chefs who created dishes that we know as being the foundation of American food. The legacy of those chefs is everywhere; Hatchet Hall has simply created an opportunity to ponder it.