Home Uncategorized Hasbro Responds to Petition Urging Them to Make an Easy-Bake Oven for... 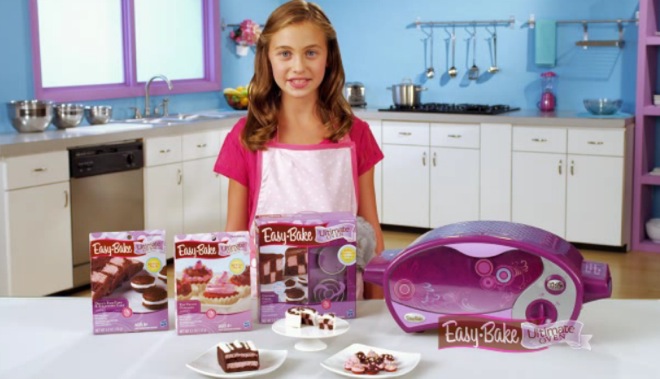 A change.org petition recently popped up urging the CEO of Hasbro to “feature boys in the packaging of the Easy-Bake Oven.” Eighth-grader McKenna Pope started the campaign when she found her 4-year-old brother, Gavyn, trying to cook and warm tortillas on top of his lamp’s light bulb. When looking to get an Easy-Bake Oven for him as a Christmas gift, she and her parents found it “quite appalling” that the machines only featured girls on the packaging, and that the color schemes on the ovens were decidedly “girly,” with hues of pink and purple.

“I feel that this sends a clear message: women cook, men work,” she wrote. “I want my brother to know that it’s not ‘wrong’ for him to want to be a chef.”

The petition—now with 42,514 signatures at the time of this writing—has its share of high-profile supporters including Bobby Flay, Graham Elliot, and Top Chef alum Kevin Gillespie. PR firm Bullfrog and Baum even put together a video featuring some of the chefs they represent (including Joshua Whigham from The Bazaar and Jeff Mahin from Stella Rossa) supporting the movement.

We reached out to Hasbro for comment, and here’s what they had to say [emphasis ours]:

“As a consumer centric company we’ve extended an invitation to McKenna Pope and her family to come visit Hasbro and meet with our EASY-BAKE team. Through the years, based on both market research and buying patterns, we have seen that the primary interest in the EASY-BAKE Oven comes from girls. We have made ‘gender neutral’ EASY-BAKE Ovens in the past and clearly we believe it is a great product that can provide lots of enjoyment for both girls and boys ages 8 and up.”

Anybody reached out to Alton Brown or Wolfgang Puck for an endorsement deal yet?