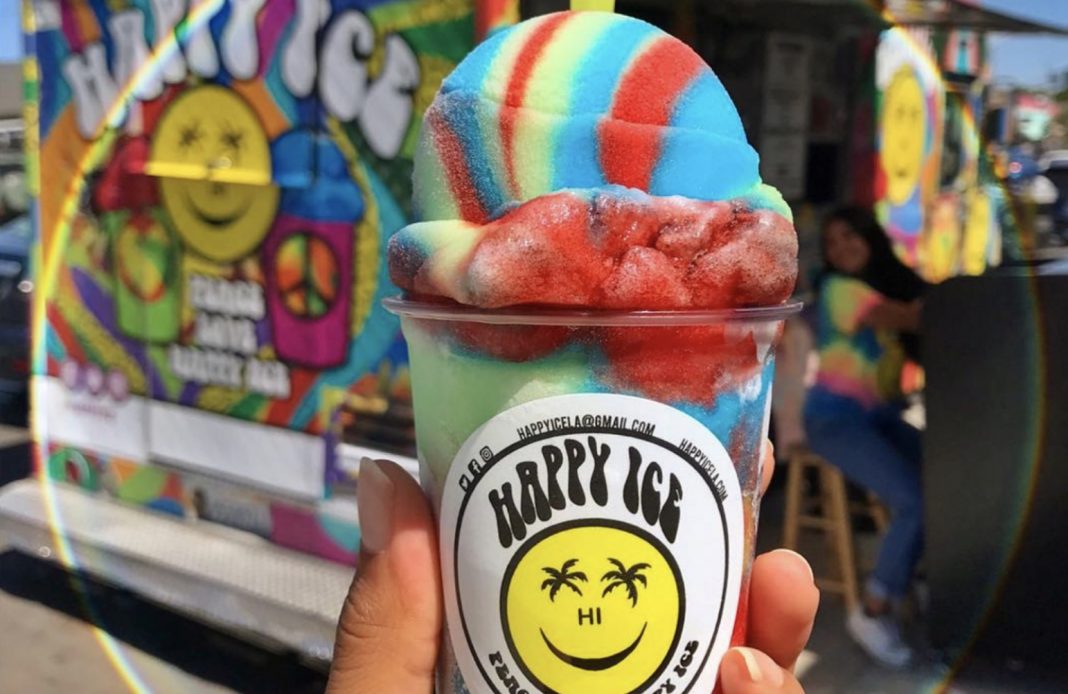 When Happy Ice opens its brick-and-mortar shop on Melrose this weekend, it will represent the culmination of years of work for founder Lemeir Mitchell, bringing a taste of his native Philadelphia out to L.A.

“I moved here from Philadelphia after my father was incarcerated with a life sentence in prison and my brother passed away unexpectedly,” Mitchell says. “These events made me realize that tomorrow is promised for no one.”

When he headed west, Mitchell didn’t have water ice on the mind. Instead, he moved to L.A. intent on becoming a tattoo artist. He got a job at a tattoo parlor on Melrose, sleeping on the floor between shifts when he couldn’t yet make L.A. rent. During those months, he became enamored with L.A.’s food truck scene. From there, the idea of Happy Ice was born.

Launched as a truck in 2017, Happy Ice quickly developed a loyal–and star-studded–clientle.

“When we first opened, I did not think we would make much. We made $400 the first day. It doesn’t sound like much, but I felt like I had struck gold that day,” Mitchell says. “That was amazing to see. And then one day Angelina Jolie came to the truck and a paparazzi took a photo of her with Happy Ice. Everyone wanted to try Happy Ice afterwards. Since then, we’ve had people like Post Malone, Lil Uzi Vert, Kehlani, athletes, so many celebrities came to try it. It’s been a crazy experience!”

Between celebrity fans and social media clout, Happy Ice expanded from one truck to multiple. And, now, to a storefront not far from the tattoo parlor where Mitchell once slept on the floor–but the opening hasn’t been without hiccups.

“We were ready to open earlier this year but the pandemic and lockdown put a stop to that. Finally getting a green light from the L.A. health department was amazing,” he says.

But then, in late May, just as Happy Ice was set to open as a brick-and-mortar, the opening was paused, briefly, once again. When protests triggered by the killing of George Floyd filled the streets, Mitchell packed up a rolling cooler full of water ice and joined the demonstrators, sharing his wares. That night, as incidents of vandalism broke out along Melrose, he stayed with his brand new shop, watching over it through the night.

“So grateful for that respect received from everyone. I will never forget this moment,” he wrote on Instagram the next morning.

At last, on June 20, he will officially open the Happy Ice doors.

“The best way I can describe it is like a graduation. After so much preparation and roadblocks along the way, we are finally able to open,” he says.

Mitchell says that he’s put the extra time leading up to the opening to good use, adding to his repertoire of creative and colorful variations on the slushy water ice theme. And, with everything going on in the world, he thinks the timing might be just right to bring something sweet and fun into the world.

“These have been a couple of challenging months, with not much to be happy about. I am hoping that the opening of the Happy Ice shop will bring happiness to people’s lives, a place where parents, their kids, and everyone can enjoy a treat during summer–and for a long time to come.”

RELATED: They Held on Through the Pandemic, and Now L.A.’s Black-Owned Bookstores Are Thriving