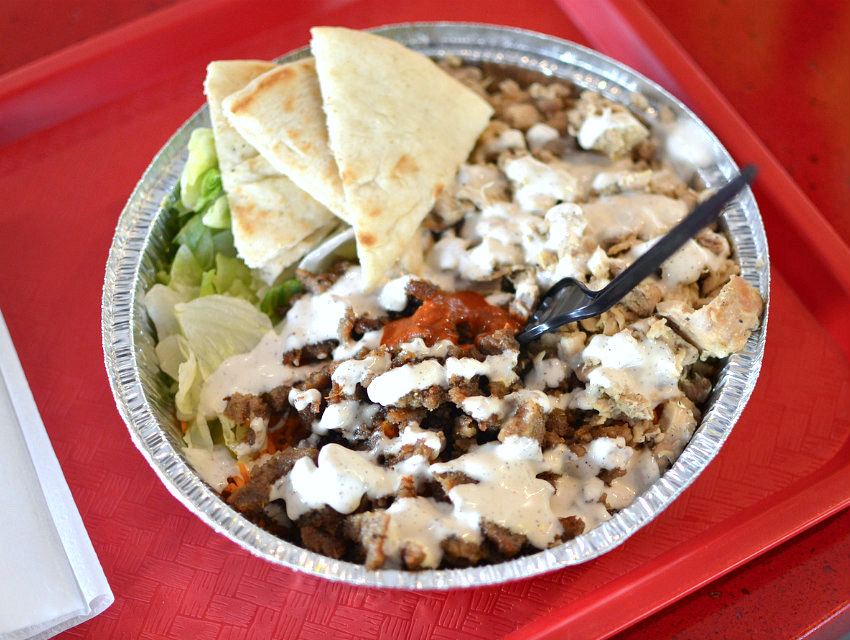 New York sucks. I’ve said it before and I’ll say it again and I’ll continue to say it after I inevitably move to Brooklyn because that’s what everyone seems to be doing these days. But I have to give credit where credit is due. As much as it pains me to say this—The Halal Guys is fantastic.

For those of you who don’t follow the quick-service restaurant industry newswire, The Halal Guys started as a popular street cart in Midtown Manhattan serving up Egyptian chicken and lamb on rice before being acquired by fast-food conglomerate Fransmart and turned into a franchise-able brick-and-mortar. The first few locations outside of New York sprung up in Chicago, and then, in late 2015, the first California location opened in Costa Mesa to ridiculously long lines. The Halal Guys continued marching northward into Long Beach, and in early July they finally (finally!) opened their first L.A. location in Koreatown. I showed up at 3:00 p.m. on a Friday—several hours after the lunch rush—and the line was still well out the door, the smell of heavily marinated meats bleeding into the street.

I got the chicken and gyro combo platter ($8.95) with extra white sauce, which, according to the internet at large, is the right move. In a word: It was awesome. In several words: all the reasons why are explained below. 1. Violently Orange Rice
If the rainbow food craze has taught us anything, it’s that humans are instinctually motivated to put brightly colored things in their mouth. This rice is no exception. It’s a long-grain basmati that’s colored with an absurd amount of turmeric and possible achiote (google seems unsure) to create a traffic-cone-like hue. It’s relatively dry, which seems like a bad thing, but it gets moistened by the relentless flood of gyro grease.

2. Extra-Greasy Gyro Meat
Most gyro meat is shaved directly from a rotating spit onto the plate/pita. Out of necessity, The Halal Guys made a vast improvement to the system. Since they move such a high volume of meat and have such a high turnover rate, a cook shaves off a bunch of gyro meat en masse and throws it on the flat top. That’s where the magic happens. A pool of fragrant, processed lamb and beef fat pools on the hot surface and it caramelizes every single square inch of the meat shavings. The chicken is solid too, but, really the gyro is where it’s at.

3. Chicken-Steamed Pita
There’s no single word or term to describe this cooking method, so I made one up. The Halal Guys’ pita is chicken-steamed: rounds of flat bread are thrown directly on top of the giant pile of chicken cooking on the flat top and gently heated via the rising steam. The pita becomes warm and supple and soaks up the perfect volume of meat liquor. 4. Mayonnaise
People on the internet have long raved about The Halal Guys White Sauce, and several noble folk have tried semi-successfully to reverse engineer the secret recipe. The only hint the company has given (via the ingredients list on their to-go sauce packets) is that it’s mayonnaise-based as opposed to the yogurt or sour cream that you may find elsewhere. Mayonnaise is easily the best of the creamy white condiments and its presence improves most foods, gyro and orange rice bowls included.

5. Hot Sauce that Doesn’t Punk Out
Damn. I’d gotten so used to restaurant hot sauces punking out that I forgot what it was like to get absolutely Scoville stomped during a casual weekday lunch. It was a rush. The Halal Guys’ red sauce isn’t anything too crazy—the ingredients list says it’s a pretty standard mix of ground red pepper and vinegar—but when it fits you, it hits way harder than you’re expecting it. Really plays off the lamb fat and mayonnaise nicely.

6. Line Theory
This is the resoundingly true theory that the longer you wait in line the more you will enjoy the thing for which you were waiting. It’s likely some sort of emotional defense mechanism—you convince yourself that the effort wasn’t in vain to avoid acknowledging that you wasted precious time in a game of speed chess against death—but thats not important. What is important, is that each minute you spend waiting for that sweet, mayonnaise-y, charred bowl of meats, the more you appreciate it.