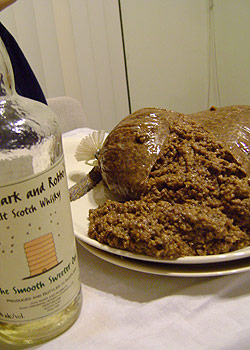 On Saturday night, I was invited to celebrate Robert Burns Night—the Scottish celebration of the country’s national poet—at the home of my friends Ewan and Angel Anderson in Studio City. Ewan was born and raised in Scotland, and described the tradition to me as “sort of like a Scottish Passover”—namely because of the drinking (here, whisky), the audience participation (a group recitation of poetry by Robert Burns), and the ritual supper.

Our meal included Cock-a-Leekie soup (chicken and leek soup, ours without the “cock” to appease the vegetarians), some “neeps and tatties” (mashed turnips and carrots served alongside mashed potatoes), and gravy boat upon gravy boat of thick, creamy onion sauce.

The star, of course, was the haggis. (So much so, it gets a poem read to it before it’s served.) Ewan claims that most Scots don’t even eat real haggis anymore—a mix of a sheep’s organ meats, onions, spices, and Scottish oats, sealed in a sheep’s bladder and boiled (mmmm). Instead, they eat a less offal-filled version like the one Ewan ordered from a Texas rancher who keeps a herd of real Scottish Highland sheep. It was a delectable combination of ground lamb meat with oats, onions and spices stuffed inside an artificial casing. While not much to look at (see above), it tasted rich and gamey—so good I went back for seconds. (Note: I regretted this decision an hour later when I was too stuffed with lamby goodness to sit up straight.) Angel also whipped up a strikingly similar vegetarian haggis using a lentils and spices baked in a casserole. Honestly, with the amount of onion sauce covering my plate it didn’t matter what was underneath.

Before dessert, Angel stood up and did the obligatory speech remembering the life of Robert Burns—who, it turns out, was Scotland’s first real hipster. We also gave a toast to the monarch—or, in our case, the President. Ewan said it was the first time in eight years that he meant it.

Then dessert! There were two desserts, actually. One was cranachan: fresh raspberries soaked in whisky (how did raspberries in January become a Scottish tradition?) topped with cream that was whipped with whisky and honey and a sprinkle of oats. The other—less traditional—was Irish pudding: a heavenly marriage between a whisky cobbler and bread pudding. Top this with heavy cream and call it a week.

After dinner we retired to the living room and took turns reading poems by Robert Burns. Ewan recited the famous tale of “Tam O’ Shanter”—a warning to Scottish mean about the dangers of over imbibing. We all sang as our friend Russell played “Auld Lang Syne” on the banjo. Another couple read a dramatic dialogue between The Simpsons’ Mr. Burns and Wayland Smithers—eh, close enough. As for me, I did a boisterous recitation of the poem “A Gude Ale Keeps the Heart Aboon.” So, it turns out, does Scotch and good friends.