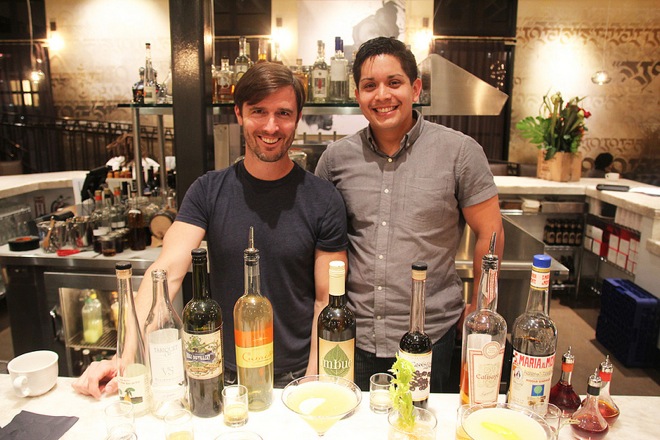 “Cocktails that don’t make you feel like crap” should be the tagline for Venice’s new Feed Body + Soul restaurant which features an all-organic (natural ingredients, no refined sugars) cocktail program by mixologists Marcos Tello and Garrett McKechnie (both formerly of Pasadena’s Bar 1886 at the Raymond). Yes, waistline watchers, that means here you can actually enjoy a drink and pat yourself on the back as these drinks have a lower caloric footprint than those that use sugar. So long, boring ol’ vodka soda.

When the new organic beer and wine restaurant won the liquor license lottery, it sought out Tello and McKechnie to create the unique cocktail program which features not only organic spirits but organic liqueurs, syrups, bitters and garnishes as well. The whole process of stocking the bar top to bottom took nine months of research, but in the end, they found greener versions of every bar staple—from Campari (Calisaya) and curaçao (Marian Farmhouse) to amaro (S. Maria al Monte), absinthe (Ridge Distillery), and vermouth (Imbue).

For the products that they couldn’t find organic counterparts for, they had to think outside the bottle, so to speak. They went to local company Miracle Mile Bitters to create organic, refined sugar-free replicas of Angostura, Peychauds, and orange bitters. For maraschino cherries, they found a strain of the Marasca cherry growing in Oregon, sourced the farm which does a sun-dried version, and then combined the cherries with organic Clear Creek cherry liqueur in place of Luxardo to create their own natural version of the cloying, neon garnish.

Tello says that an all-organic cocktail program isn’t exactly a new concept but theirs is the only one that’s doing it in conjunction with no refined sugars.

But Tello and Mckechnie’s work didn’t end with stocking the bar. With a cocktail program focused on the classics, every recipe had to be tweaked to accommodate the new balance of flavors. “If you have sugar added, something like the curaçao is sweet so therefore [the original recipe calls for] less of it. So it really altered almost all of our cocktail proportions and ratios. We had to retool everything and really start from scratch,” said Tello. For instance, the margarita here needed a bit of agave to help the light, biodynamic orange liqueur balance out the citrus in the cocktail. In their caipirinha, instead of using simple syrup, they use coco palm which also increases flavor.

If you want a classic that’s not on the list, it’s not a problem for the bartenders who have been trained by Tello and McKechnie in these organic ways. Be aware, though, that a Negroni here may be browner than you’re used to; it comes with the territory, since seemingly everything is brown in the unrefined sugar world.

Feed’s list of five classics and five seasonal signatures will change regularly with the seasons. They work with a local purveyor so they are able to flip ingredients out as they go in and out of their peak growing times. “That’s the fun part about it… and it’s also a little bit of a pain in the ass to stay on top of what’s in season and what’s coming out of season,” said Tello.

But they’re not jumping on the “micro-seasonal” bandwagon with places like Muddy Leek in Culver City and Century City’s Hinoki & The Bird—whose cocktail and dinner items are swayed by what’s immediately available at the farmers’ market—because that’s now a thing. “We’re actually doing it out of necessity because we don’t have a lot of storage, so it’s really dependent on the chef. If the chef has a shipment coming in, we’re just going to pull from that. We can’t really stack ingredients on top of his.”

Here’s what you can currently find on their drinks list:

Heads up: look for a Mai Tai cocktail in the near future. Marcos found a couple of different organic rums (made from organic molasses and sugar cane) and threw them in a barrel to age them and “reproduce that funky Jamaican rum like Appleton and Smith and Cross, but a little lighter so it’s approachable in a Mai Tai.”