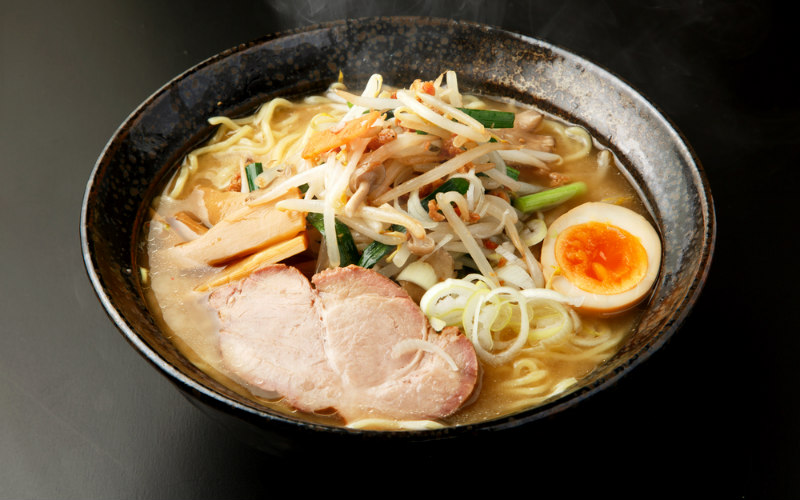 Ramen is on its second or third generational boom. The latest wave of ramen has chefs from completely non-Japanese backgrounds, big-name out-of-town transplants, and heavily branded nods to social media. And you should go eat all of it. Here are five new ramen spots coming to L.A. to write down in your iPhone Notes folder labeled “IS COLD NEED SOUP” because I’m assuming you all have one of those.

Chef Andre Guerrero (The Oinkster and Maximiliano) is jumping head-first into the ramen game and he’s putting some personal touches on it in the process. Just like Guerrero did with The Oinkster and its pork adobo burger, there’s a Filipino inflected noodle soup and lumpia (Filipino egg rolls) on the menu alongside a more traditional list of ramens like shio, miso, and tonkotsu. Ramen Room has only been open for a few weeks, but it seems to be a solid and needed neighborhood addition to Sherman Oaks.

When it rains it pours—The Valley is getting even more ramen. Oh Man! Ramen is the brainchild of chef Luke Reyes (Butchers and Barbers) and until his space officially opens up, he’s running it as a lunch-only pop-up from Scratch Bar right next door in Encino. Reyes has a veggie ramen decked out with roasted squash and black kale alongside a relatively traditional tonkotsu. The rest of the menu is dotted with of-the-moment-seeming small plates: Karaage fried chicken sandwich on Hokkaido milk bread, uni and spicy tuna rice bowl, sweet and spicy chicken wings, etc.

RELATED: This Creamy Truffle Ramen Should Be on Your Food Bucket List

You know what ramen has always been missing? Catchy slogans and social media-friendly branding. Or at least E.A.K. really seems to be banking on that. There’s a hashtag (#ramenlust) printed on the chopstick wrapper, there are catchphrases like “But First, Ramen” on the walls, and even their nori has E.A.K. somehow printed on it. But hey, if Don Draper taught as anything, it’s that branding is everything. And that the ’60s were a great time for casual workplace sexism. E.A.K. opened just this week in West Hollywood—slinging a hybrid tonkotsu and shoyu broth with thick and chewy noodles—and they already have another location on the way in New York.

Ippudo hasn’t opened yet, but it’s coming, and it’s going to be big. Eater LA first reported that the world-famous New York-based ramen shop would be opening near Third Street Promenade in Santa Monica as well as adding a second west coast location in Berkeley. There’s no official time table on when it’s set to open, but it likely won’t be until early 2017. Still, get hyped. Even if the eventual hype is the very thing that ruins the restaurant for you, it’s still fun to believe in things.

I’ve said it before and I’ll say it again: Ramen Roll is going to be the biggest wildcard restaurant opening of the year. The dude who created Umami Burger, the dude who created the video game series Crash Bandicoot, the sushi chef who got busted for serving whale meat a few years ago, all coming together top open a “fine-casual” ramen and sushi and gelato shop in Culver City. America truly is a melting pot. No one is 100-percent sure when it’s going to open, but Ramen Roll’s website says it’s opening this fall.