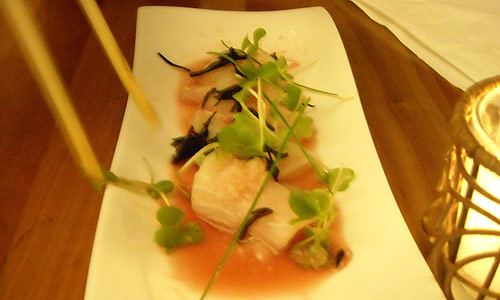 Tonight is the last night of guest chef Noriyuki Sugie’s (formerly of Asiate in New York) two-week run at Breadbar in Century City. I went last night, and compared to Ludovic Lefebvre’s stint back in the fall, the joint was pretty empty. Looks like Jonathan Gold dubbing it a “spectacular meal” wasn’t quite enough. Those who were there, however, definitely came for Sugie. I spotted more than just my own newly dubbed “bloggie-cam” snapping pics of the food. (I should also take this time to apologize for the on-the-spot pictures that have and will continue to appear here. My Nikon Coolpix—yeah, that’s right, Ashton’s camera—doesn’t make me any more the photographer.)

Why it’s worth going? The delightfully mushy textural extravaganza that is crab guacamole and the subtle aroma of grated lemongrass atop hamachi sashimi (pictured here). But grilled squid—in the style of Nobu’s “squid pasta”—in a spicy broth was the highlight, showing off Sugie’s Spanish flare with chorizo and roasted peppers.

Two-ounce sake and wine pours are great for doing multiple pairings—though the waitstaff hasn’t been instructed on what goes best with which dish, so the guessing is up to you. We did pretty well with a Hitachino Nest Pale Ale from Japan’s Kiuchi brewery and a glass of Narutotai Genshu sake. Yum.

Tonight’s the last night, and my guess is there are plenty of tables left. I love this trend of guest chefs popping into offbeat venues—though I have a feeling it’s a nightmare to execute. Let’s show them it’s worth it.