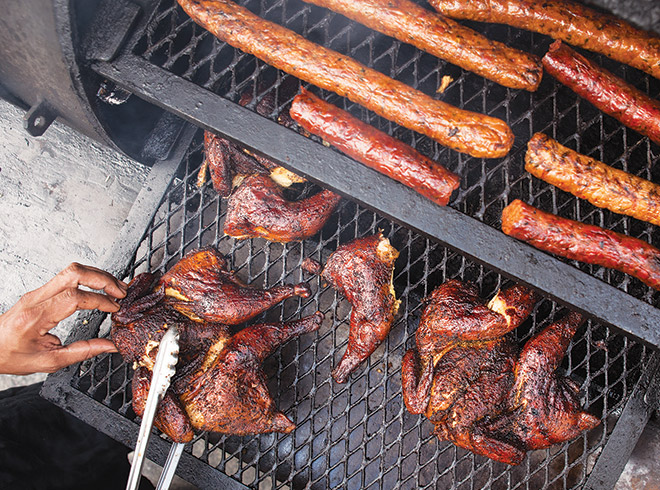 Last summer Adam Perry Lang—a Long Islander who’s famous for urban meateries like Daisy May’s BBQ USA in New York and Barbecoa in London—rolled into the Hollywood back lot of Jimmy Kimmel Live! The frequent guest and Kimmel pal was driving a flatbed trailer with a two-ton customized smoker and a pit in which he burned down hunks of wood (preferably pecan) to make his own charcoal. “I went a little bit crazy,” says Lang, who hopes the crowds that shelled out around $23 apiece for his brontosaurus-size beef ribs will return when he opens his barbecue restaurant in L.A. later this year.

He’ll be joining ranks with a number of local pitmasters who are tackling what could be the most distinctly American cuisine. In the absence of our own strong regional focus (unless you count Korean barbecue), L.A.’s latest influx of meat smokers doesn’t adhere to any specific style—say, Kansas City or Memphis. Instead they mix and match flavors and techniques. Roadhouse LA, Hollywood’s new “modernist global barbecue” restaurant that’s co-owned by Umami Burger’s Adam Fleischman, tops pulled pork with mole. Downtown newcomer Horse Thief BBQ and Smoke City Market in Sherman Oaks serve loose interpretations of heavily rubbed Texas-style ribs and brisket.

“Barbecue is going through a renaissance,” says Neil Strawder of Bigmista’s Barbecue. “I’ve created my own rubs and sauces. It’s an amalgamation of all the things I’ve learned.” For the past six years Strawder has been selling (and selling out of) brisket, pork shoulder, and the spicy-sweet bacon known as “pig candy” at local farmers’ markets. The operation has gained so many fans that he and his wife, Phyllis, are preparing to open a restaurant in downtown’s Historic Core this summer. “Back in the ’70s, there were a lot more barbecue places in L.A., especially in South-Central,” says Kevin Bludso of Bludso’s BBQ, the six-year-old Compton take-out counter. A short history might include Woody’s, Tasty Q, Jay Bee’s, and Mr. Jim’s (slogan: “You need no teeth to eat Mr. Jim’s beef”), most of which are gone. Last year Bludso brought his Texas-tinged barbecue to a flashy spot on La Brea Avenue, which offers a few things the original doesn’t: cocktails, TVs, chairs.

Our lust for ’cue lies at the intersection of such American dining obsessions as nose-to-tail eating, slow cooking, and comfort food. There’s also the artisanal appeal, the nuances a pitmaster can infuse into a cut of meat by choosing one kind of wood over another or by varying smoking time and temperature: the basics fans of barbecue spend hours debating. “The essence of barbecue is developing a relationship with this unruly thing you’re cooking,” says Lang, “and I’m really drawn to fire.”

Open Wide: Where to Get It

If You Enjoy Zydeco and BBQ, We Have Some Terrific News for You

The BBQ Championship Is This Weekend in Arcadia, So It Looks Like You May Be Going to Arcadia This Weekend