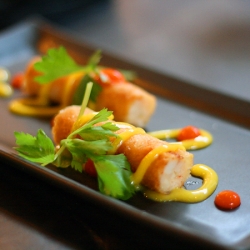 It’s a proud day to be an Angeleno! Our city claimed not one, but two spots in GQ’s “Best New Restaurants in America” list. Ricardo Zarate’s Picca came in a number six, while Michael Voltaggio’s ink. scored the coveted number one spot. GQ’s Alan Richman, the notorious dining critic known to effortlessly switch between effusive praise and brutal takedowns (check out his dismantling of South Carolina’s Husk this year), echoed much of the praise already heaped onto these two restaurants, including the kind words from our own critic Patric Kuh, who named both places to his list of L.A.’s Best New Restaurants.

At Picca, Richman marveled at Zarate’s mastery of Peruvian cuisine, its exceptional seafood (“A fantastic dish was tuna tartare with avocado and lemon-soy dressing, so fresh it practically floated off the plate”) and its efficiency of service (“Although the dining room seats not even one hundred customers and is open only for dinner, on some nights more than a thousand plates of food are served”).

Richman, however, saved his kindest words for ink., remarking that every dish is “carefully conceived,” with Voltaggio managing to produce a version of molecular cuisine that is “surprisingly soft and soothing.” It’s safe to say that Richman, a man not known for championing L.A.’s blossoming restaurant scene, has been converted to the Cult of Volt.

3. Next (Chicago, IL) No Holds Barred, Nothing Left Behind

5. The Catbird Seat (Nashville, TN) The Best Duet in Nashville

7. The Woodsman Tavern (Portland, OR) We’ll Be at the Bar

10. Barley Swine (Austin, TX) The Restaurant That Grew Up in a Trailer