Home Education What’s Even Better Than Bread and Butter? An L.A. Culinary Instructor Has... 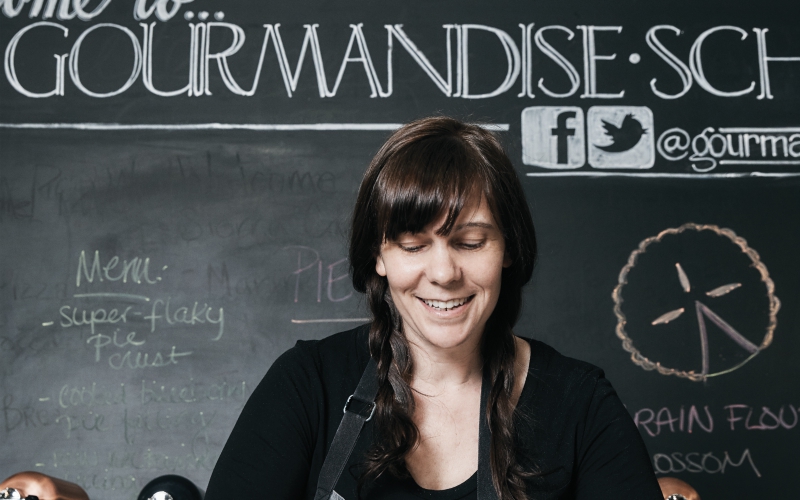 You know what is even better than butter?” asks Clémence Gossett, standing over a cutting board littered with crumbs and slices of crusty fresh-baked sourdough. “Chocolate.” In a flash she disappears into a nearby pantry and emerges with a quarter-size coin of malty Peruvian chocolate, which she plants squarely on a slice of sourdough as though it were a slab of Brie. It’s a combination you might not have considered before, but rest assured it is as wonderfully delicious as you would imagine.

Gossett, one of L.A.’s most-beloved culinary instructors, is moving about a classroom at the new location of the Gourmandise School of Sweets & Savories, the cooking and baking school she launched seven years ago on the top floor of Santa Monica Place. Sandwiched between an ArcLight and the forthcoming Zimmer Children’s Museum, her school’s space is an actual scone’s throw from the original location and nearly triple the size. That means more opportunities for students to take courses in Laotian home cooking, Thai street food, knife skills, and cake decorating. There’s even an intensive ten-week professional baking series.

Gossett exclusively hires instructors who work in the local culinary scene, so students take classes with chefs like Rose Lawrence of Rustic Canyon and cookbook author and soba master Sonoko Sakai. The new digs also have luxe amenities like a glassed-in demo kitchen and a marketplace where Gossett stocks her two favorite ingredients: flour milled from local grains and really good baking chocolate.

During her 20 years living in L.A., the Paris-born Gossett has emerged as a local-grain and chocolate evangelist. Her obsession began as a child, when she worked at the country inn her grandparents ran in Saignon, a tiny speck of a town carved out of a rocky hillside in southeastern France. Between shifts pouring pastis for gray-haired Frenchmen, she taught herself to bake at age 8 or 9; soon her chocolate cake landed on the menu and changed her life for good. “I remember looking out from the dish room and seeing people eat my cake,” she recalls. “It was transformative.”

There were a few detours along the way to her starting the Gourmandise School—including a stint in the marketing department at Fox, where she sold cookies from her cubicle—but eventually she settled into her role as founding instructor, spreading the gospel of grain and cocoa beans. In fact, Gourmandise is the only place in L.A. that lets you choose and mill your own flour before a bread workshop and the only school on the West Coast that teaches bean-to-bar chocolate making.

In 2016 Gossett launched a yearly grain conference where farmers, chefs, bakers, and home cooks gather to discuss everything from how to shape the perfect boule to how to enlighten consumers as to why a loaf made with heirloom Rouge de Bordeaux flour is ten times the cost of a loaf of Wonder Bread. “All you have to do is put it in their mouth,” she says.

So rather than preaching about the sustainable virtues of dry-farming California grain, she bakes an average of 25 loaves of sourdough and 200 cookies each week and waits for her pupils to take a bite. Inevitably they’re dying to know, “Why is this so good?”

She is, of course, happy to provide the answer—just sign up for a class.

RELATED: A Sneak Peek at the Cocktail-Inspired Coffee Drinks Coming to Koreatown