Home Uncategorized Got Bupkis for Brisket? Leave Passover to the Pros 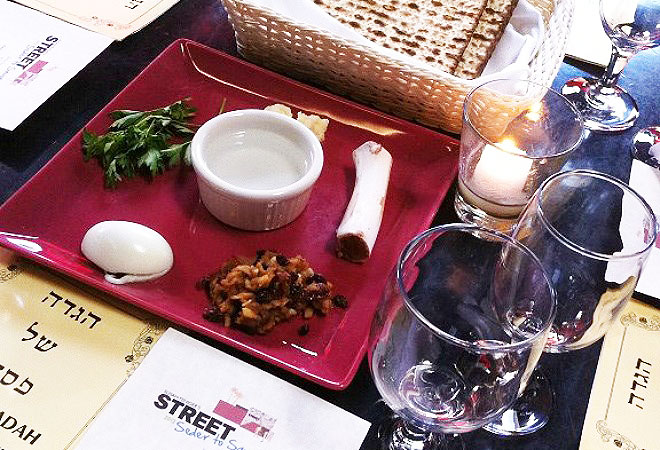 Passover begins Monday night, and while many Anjewlenos will be gathering around a table in someone’s living room, eating Bubbe’s Kosher kugel, some of L.A.’s top chefs will be cooking up gourmet Seder dinners for those who’d rather not schwitz over the tzimmes. Not Jewish? Plum-braised short rib, eggplant with buttermilk sauce, and lemongrass matzo ball soup are delicious no matter your faith.

The Larder at Tavern

In need of an artisanal appetizer to bring to Rabbi Cohen’s? Susan Goin is offering a Passover takeaway menu from the Larder at Tavern from March 25 to April 2. Delectable offerings such as chicken liver pate, matzo ball chicken soup, and braised lamb shank with horseradish jus are sold a la carte, and serve four or more. 48 hours notice required for orders. More information.

Susan Feniger hosts A STREET Seder to Savor on Tuesday, March 26. For $60 per person, diners can feast on dishes such as rustic eggplant with buttermilk sauce and mint oil, heirloom spinach soup with matzo balls, and matzo-crusted spring nettle cakes. Oh and we can’t forget the coconut macaroons dipped in Moroccan spiced chocolate. The Seder service will be held by Jessica Steinman at 5 p.m. Reservations recommended; open seating available after 7:45 p.m.; kid’s menu available for $25 per child. More information.

Chef Suzanne Tracht is throwing a special four-course Passover meal and informal Seder service on Monday, March 26.  Break unleavened bread with family over a meal of dishes such as matzo ball soup in lemongrass broth, Jar’s signature pot roast, Alaskan halibut with spring scallion butter, and family-style sides such as horseradish-mashed potatoes. Finish off the feast with macaroons and lemon cheesecake. The dinner costs $130 per adult, $55 per child. More information.

Partake in a Mexican-inspired Passover dinner at Rosa Mexicana from March 25 to April 2. Matzo balls are spiced up in varieties ranging from poblano pepper to chipotle marrow. Indulge in dishes such as roast saddle of lamb stuffed with quince, jalapeno, pomegranate, and cilantro; roasted brisket of barbecued beef wrapped in a banana leaf with dried fruit tsimmes; and tacos with crispy chicken cracking, caramelized onions, sliced egg, and a mustard salsa verde. More information.

In Time for Passover, a Matzo Taste Test