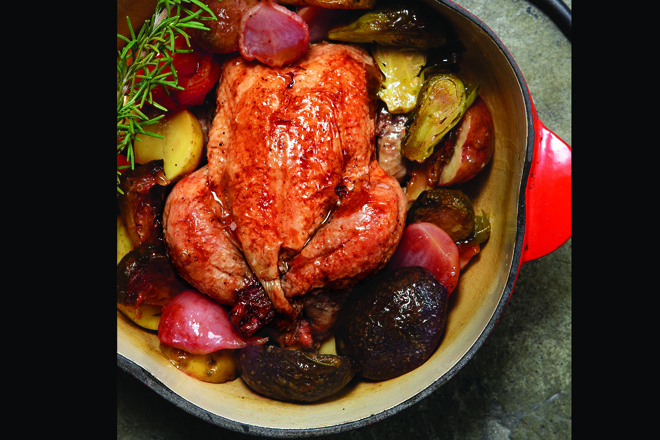 If there’s a stretch of pavement that more perfectly fits a certain image of the city than the 8900 block of Sunset, I don’t know it. In this neon-accented jumble of shop fronts and nightspots you can consult a psychic, acquire a spray-on tan, rent a two-tone convertible Rolls-Royce, and bask in a face-melting guitar solo at the Whisky. Step off the sidewalk into Gorge, a snug restaurant that opened in September, and you can also eat some extremely good head cheese that is nothing like the pimento-studded stuff you might get from the deli counter. Chef Elia Aboumrad fashions her fromage de tête by simmering pork heads for six hours, letting them cool before covering the flesh morsels with their own broth, and allowing them to set. Spread over a piece of warm baguette, the head cheese releases a hint of fresh tarragon that harmonizes with the broad meaty notes.

Charcuterie is of the moment. Asking whether a restaurant cures its own bacon is a question that can elicit a kind of you-poor-schmuck smile from the waiter. Of course it does—and salumi, cervelat, and testa. Among today’s commercial kitchens, the lodestar is the smokehouse of yesteryear. Well after 2011’s $600 multitome Modernist Cuisine made its splash, chefs are still pawing through Jane Grigson’s 1967 classic, Charcuterie and French Pork Cookery, for inspiration. Sure, there’s some trend chasing going on, but for a lot of kitchens charcuterie is almost the antidote to the celebrity-chef movement, in which you must be photogenic, capable of owning the room like Oprah, and versed in turning a mass of ingredients—chosen at random by TV producers, if you’re playing the game right—into a tweetable trophy. Charcuterie isn’t flashy. Constructed out of view days if not weeks in advance, it’s about tradition and craft and the integrity of the raw ingredients. To gussy it up is to ruin it. I admire that bravado—you’re confident with what you have, and you slice it.

Aboumrad practices a decidedly old-school version of what is already an old-school art. Born in Mexico City, the 29-year-old uses hog—not synthetic—casings. She shuns nitrates and punches up the saucisson with patient aging instead of heavy-handed seasonings. The freshest of her dry links, perfumed with garlic and Basque piment d’Espelette, is so creamy, it is reminiscent of the best bologna. The driest—a classic salami she tweaks with red wine and ginger, aging it six weeks—is chewy and intense. Between them is a sausage she ages for a month and spices by grinding the giant peppercorns grown in her grandparents’ native Lebanon.

Apart from the occasional waitress and a kitchen hand, the only other staffers are Aboumrad’s husband, Darius Allyn—he’s the beverage director—and her business partner, Uyen Nguyen, pastry chef by day and manager by night. As restaurants go, this is about as personal as you can get. Yet Aboumrad and Nguyen, whose family escaped Vietnam when she was a child, keep wide of calling attention to their own back stories. The women met at the Lenôtre cooking school in Paris. Later Aboumrad apprenticed at the original L’Atelier de Joël Robuchon and made such an impression that after two years she was named the opening sous-chef at Robuchon’s MGM Grand location in Las Vegas. Nguyen (who grew up in the O.C.) followed her to the desert, crafting pastry at Le Cirque and Guy Savoy. It was Aboumrad’s gig overseeing the dining ops at THEhotel at Mandalay Bay that introduced her to Allyn, who was in charge of the wine program at the hotel’s Aureole restaurant.

Having fled one debauched Strip, they’ve set up shop on another, with a restaurant that seems thoroughly antithetical to its surroundings. In this low-key space a refrigerated case of sausage by the doorway passes as a showy touch. The hunter green walls are adorned with original 18th-century French tapestries Aboumrad borrowed from her mother, but she and Nguyen stained the Home Depot wainscoting themselves. Arrayed below a pressed-tin ceiling, basic Windsor chairs cluster around saloon tables, and a metal counter reflects an overhead rack that holds knobby French goblets—hardy receptacles that are all the prettier filled with a cool draft of the Pasadena-brewed Craftsman Oktoberfest ale they keep on tap.

Given the nature of the place, the restaurant’s name might seem weird, telegraphing sybaritic abandon, but it’s actually a nod to the trio’s Nevada days: “À la gorge,” which means “to the throat,” is what Robuchon’s kitchen staff would exclaim when things got wild (and apparently what Napoleonic troops shouted as they mounted a charge). Pronounce it as you will. Gorge isn’t about eating yourself silly; it’s about paying tribute to a painstakingly understated—and single-minded—craft. The ethos extends to Saturday brunch, a bighearted selection that includes brûléed bananas Foster tossed over oatmeal but is most visible in the one-page dinner menu, which bears Gallic classics like frisée salad, Toulouse-style sausage, and St. Honoré dessert. Wine suggestions run alongside the food on the left, while cider and craft beer pairings appear on the right. On the back is a map of France indicating the provenance of what’s being poured. The signals are there; still, it would be a mistake to categorize Gorge as a mere wine bar.

Tall woman who sports a black chef’s jacket, Aboumrad works in a tight kitchen dominated by a big, old meat grinder. At each turn her approach to charcuterie displays a remarkable eye for detail. The rabbit rillettes and the chicken pâté are ostensibly similar selections—a pair of spreadable numbers in single-serve containers. That’s where the similarities end. The rabbits are poached in olive oil for 48 hours, a top layer of pearly duck fat added to the ramekin before cooling. For the pâté, Aboumrad caramelizes the chicken livers with onions. In order to keep the mousse slightly grainy, however, she refrains from passing the ingredients through a tamis, or silk screen: That way the texture lends the dish a rustic character, while the finishing layer of rich, melted Plugrá butter nudges the flavors toward delicate and refined, drawing out the tawny port that has gone into the mix.

This skill at shifting between high and low tones is a tip of the cap to Robuchon. The opening of the first L’Atelier in Paris in 2002 was a way for the hyper-punctilious legend to release the culinary id by acknowledging how kitchen crews had always eaten in private. But Aboumrad is sensitive enough to avoid falling into parody. With the Cornish hen entrée she uses a splash of lima (the compact yellow Mexican lime) to jolt the pan juices. For the oyster mousse she smokes the bivalves over hickory wood. It’s decidedly haute until she crowns the deep-flavored custard with trembling beef gelée—the yield from hours of simmering—which brings matters back to earth with its cuisine bourgeoise cues.

If there’s an example of how elusive that contrast can be, it would be the vegetable terrine. Dainty as the dish is, with various shades of green imparted by leeks and asparagus, it doesn’t add up to much. And the jellied beef broth that trembled on the oyster mousse one night was on another occasion so rubbery, I could have bounced it across Sunset and hit the Hustler store. As slipups go, these are slight, but consistency is especially crucial here. We’re talking about a plucky restaurant that has plopped itself down in an unlikely location in order to mine a subsection of French cuisine.

Aboumrad is no mere classicist; she has a sense of playfulness, too. The chef dresses the frisée salad in a warm mustard vinaigrette and drops in the requisite runny egg, but instead of tossing sizzling lardons on top, she scoops up the greens and places them over a bacon flan. Her goat cheese salad isn’t fashioned from breaded segments; the chèvre has been popped into rosemary brioche balls that, after slow proofing, are fried to order. I’m not sure a description can do the results justice. With the mackerel tartine Aboumrad bypasses the white wine-based bistro classic and poaches the fish in olive oil, a technique that highlights the richness of the flesh rather than leaving it quasipickled. Her pig’s ear tartine is a jammy reduction radiating a bouquet of gelatinous nuances that burst to the fore when you take a sip of old-vine Cairanne from the southern Côtes du Rhone, a plummy varietal with echoes of blackberries that were squished at the bottom of a picking pail. Perfect.

In keeping with the quirkiness that motivates Gorge, the classic St. Honoré pastry is the only dessert offered. Named for the patron saint of French pâtissiers, the fist-size tart demands a mastery of both puff and choux pastry, along with classic crèmes, and a deft hand with sugar work. It could come across as a marmoreal display of skill, but not here. Nguyen offers several variations, each a warm, lively update. The vanilla-flavored St. Honoré carries diminutive cream puffs; the pistachio one, a nutty macaron. My favorite is caramel ringed and hides a payload of cooked-down apples scented with anise and a touch of cinnamon. Where others leave the compote smooth, Nguyen’s is somewhat chunky, recalling the kind you’ve fork-pressed at home.

Classic and contemporary, self-assured and feisty—Gorge isn’t showy, but, boy, is it seductive. The duck sausage, browned and sizzling, bursts at the touch of a tine, scattering its seared hash over the mashed potatoes; you could be eating in the inglenook of a farmhouse fireplace. The pheasant pâté is a straight-up master class in how far beyond meat curing the charcuterie art can go. First Aboumrad must skin the birds that she buys from Inglewood purveyor Rocker Brothers, keeping them whole to later wrap the breast strips in. From the bones and legs she produces a jus that, when reduced to the consistency of syrup, will go into the forcemeat. Chopped truffles and Trader Joe’s pecans (a nice touch) lend texture, while the caul fat she uses to line the enamel mold adds depth as it slowly renders during the two hours the pâté cooks in the oven. The reward, after a few days in the fridge, is a flavor-saturated wonder that commands the taste buds. Served with a bit of potato purée and a light kale salad, the dish is a quiet statement not only about restraint and discipline but the remarkable results they can achieve.

Drinks: Superb collection of French country wines served by the bottle and the glass, with several ciders and craft brews offered as well

Atmosphere
Sophisticated, between a wine bar and a supper club.

Kid Friendly? They’d have to be adventurous