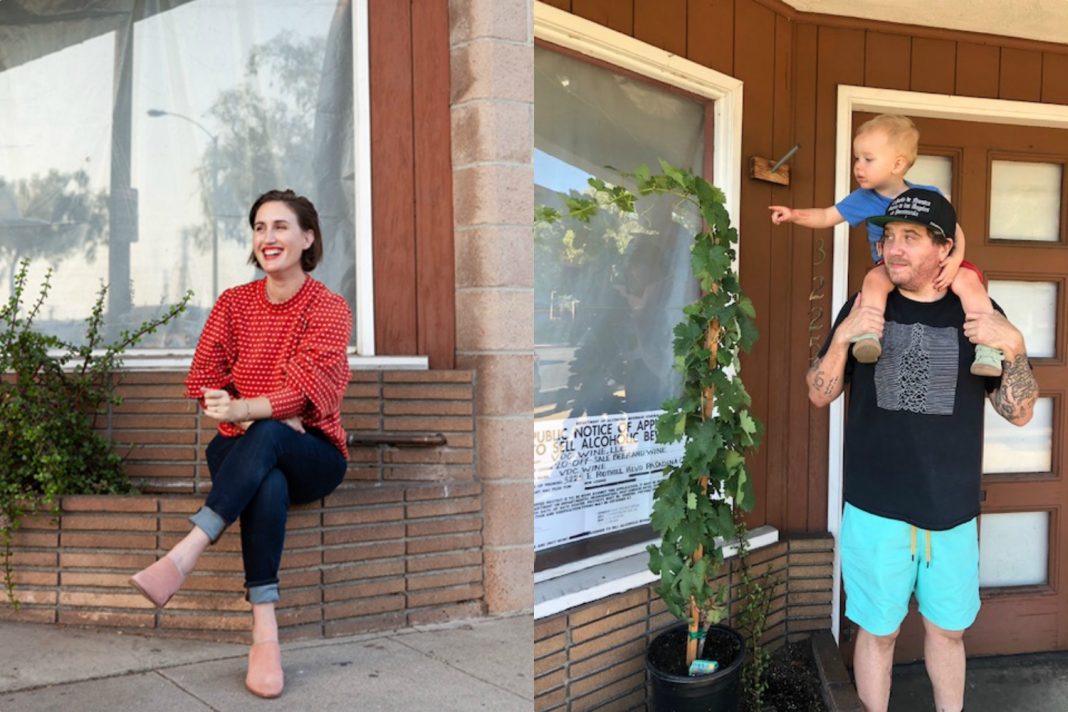 When Kate and Adam Vourvoulis were researching a location for their winery, Vin de California, they happened upon something unexpected: a part of Pasadena that was already zoned for wine making.

It turned out that more than 100 years ago, the Lamanda Park neighborhood was part of a large agricultural project called Sunny Slope Ranch. In the beginning, much of the 1,300-acre ranch produced grain, but eventually 90 acres of the property were dedicated to vines and the rest to citrus groves. At the same time, all around Southern California, thousands of acres of wine grapes were being cultivated, and wineries began to sprout. Long before Sonoma and Napa, Los Angeles was the epicenter of California winemaking. Eventually though, Prohibition put a stop to the legal sale and production of alcohol, and with it went the SoCal’s wine boom.

Now, the Vourvoulises have set up shop in Lamanda Park, and are bringing the area back to its roots. The idea was to open a winery and create a home for the label that Adam and Kate started back in 2016. In previous years, they’d made wine in Paso Robles and then Richmond California, but after having their son Cy, making wine closer to home seemed ideal. They’d envisioned that a tasting room would follow, a place to showcase the wines that would be produced there and highlight past vintages, but then the pandemic hit and those plans were put on hold. Still, the space that housed the future winery and tasting room had a storefront, and the couple decided that while their tasting room would have to wait, opening a wine shop would be a perfect way to share their love of natural wine in the meantime.

Good Luck Wine Shop opened as an online store in the spring, with Kate and Adam hand delivering bottles themselves, and more recently as a browsable brick-and-mortar shop. Many of the wines lining the shelves are made by people the Vourvoulises have a kinship with—winemakers that don’t necessarily come from generations of vintners but, instead, people who’ve fallen for the uncertain but rewarding task of turning grapes into wine.

Kate Vourvoulis, a Pasadena native, is hoping that Good Luck Wine Shop can tell those stories and make natural wine more accessible. The unexpected upside of opening a business so close to where she grew up is that she has the opportunity to share what she loves about wine with her neighbors.

“How can I bring what I’ve learned along the way? The values, the philosophies, the community—that’s what drew me to natural wine, and I get to share that with the community I grew up in,” she says. Good Luck Wine Shop also carries goods by local makers, many of whom were patrons who became friends.

The small-batch wine production happening just beyond the shop is the start of  Vin de California Winery. There are large barrels lining the space, a bottling machine, a corker, and all the other wine production necessities. Currently, the winemaking is a one-person operation, with Adam spending much of his time preparing his third vintage. Adam hopes that one day other winemakers will be able to share the workspace and make their own wines at the VDC winery. “Without the help I got from other winemakers, I wouldn’t be here,” he says, explaining that his goal is to make novice winemakers feel comfortable making their first barrels in the space.

This year, Vin de California will make 600 cases of wine from grapes harvested from vineyards all over California’s Central Coast. The Vourvoulises work with small farmers, some who are farming the land with their families, and others who are working to make their vineyards regenerative. The first wine produced at Vin de California’s facility is made in the image of 2020, using grapes that were all picked and vinified this year. Adam was worried that the Central Coast fires would effect the grapes—“There was a part of the 5 where both sides of the freeway were on fire. So much smoke”—but somehow they avoided smoke taint, which is caused by smoke settling over vineyards and the soot binding with sugar in the grapes, which can cause the wine to taste smokey or medicinal.

After pressing the wine and barreling the juice, whatever was left over went into the blend that would become Vin de California’s Harvest wine: Zinfandel, Pinot Noir, Marsanne, Tempranillo, and Barbera all coming together as a celebration of a turbulent year.

RELATED: Some Bottles of Sparkling Wine to Pop This Fine Morning