Home Uncategorized Good-Bye 2013: Our Favorite Bites of the Year 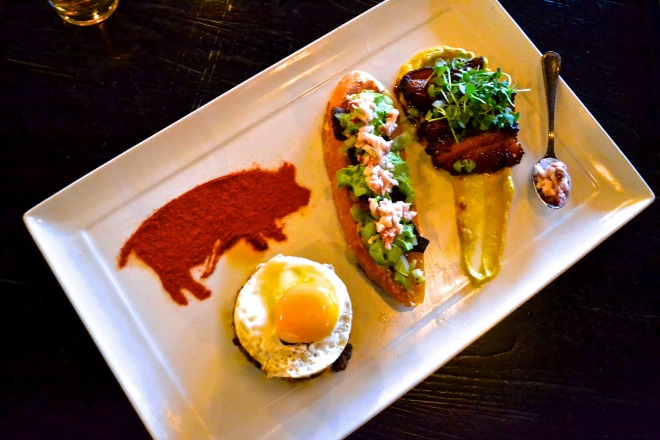 LAMag’s Digest blog staffers ate and drank their way around L.A. and beyond in 2013. Here are the bites that we’ll never forget.

Caroline on Crack: 2013 was a stellar eating/imbibing year for me what with all the traveling! But my absolute faves, which I still dream about, were The Church Key’s brown butter glaze doughnuts with black sesame shake, Artichoke Basille’s artichoke pizza in New York, Picca’s pumpkin quinoa stew (so good I had to order it twice), the Grand Cru El Salvador Kilimanjaro Kenya Process from Stumptown in Seattle, The Hoodlum cocktail at Corner Door, Son of a Gun’s Cheddar Bay biscuits a la Red Lobster, and Ink’s Fernet soda with Coca Cola Fernet Branca cream.

Bill Esparza: A bowl of rich, and marrow-laced migas (pork leg and bread crumb soup) at the Tepito neighborhood in Mexico City—I recently consulted for Parts Unknown and recommended Migas La Güera, so you’ll see how delicious this is on the new season of CNN’s Parts Unknown. In Brazil, it was the feijao tropeiro, or trooper beans meal I had in at Feijao Tropeiro with my wife in Minas Gerais, Brazil, and I still dream about the white pepper crab I shared with chef Bryant Ng and his wife Kim at J.B. Ah Meng in Singpore’s Geylang district. In L.A., it was my flawless dinner at Trois Mec, Republique’s uni and egg scramble, and my first taste of Quiroga-style carnitas at Carnitas El Momo. Perhaps the best though, were several meals I had from the women at Tamales Elena: Elena, Teresa, Judepth, Nayeli, Maria, and Heidi Irra continue to floor me with their cooking of dishes like Guerrero-style white pozole and mole guerrerense, which are both transcendent.