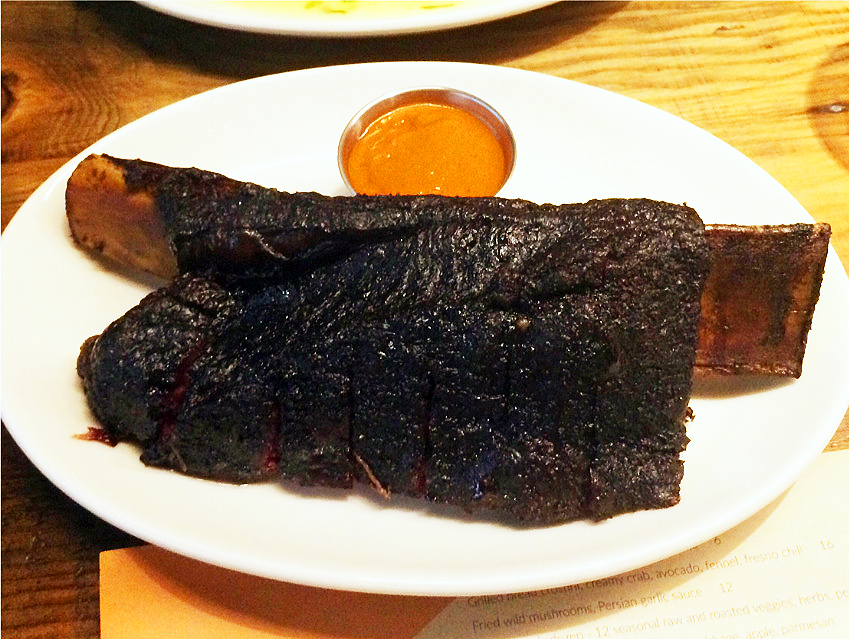 There are many reasons to eat at Karen and Quinn Hatfield’s Odys + Penelope, from the crostini with creamy crab to the Farmer’s Dozen salad with 12 seasonal and raw vegetables to the delightful desserts (oh those cornmeal ricotta fritters and the crust on that chocolate pie!). But this is a grill-focused restaurant that also has its own smoker, so let’s talk meat.

Specifically the short ribs, a $38 Flintstones-size portion that’s all glorious crust and fat and tender beefy bliss that could be mistaken for Texas barbecue. The short ribs are dry-rubbed and smoked in-house. The meat is soft enough to pull apart with a fork, and there’s a tangy sauce on the side, but the biggest battle at your table might be over who gets to gnaw on the bone and savor the mix of gristle, char, and salt that brings out caveman instincts.

Odys + Penelope is only a couple weeks old, but the Hatfields already have a dish and a restaurant that you can bet will be part of national conversations and trend stories. (Open-fire cooking has serious heat all over the country, with Jose Andres’ new Bazaar Meat in Las Vegas among those leading the charge.) You can already picture the side-by-side photos: these short ribs, Chi Spacca’s short ribs, the short ribs that New York chef Justin Smillie created at Il Buco Alimentari & Vineria and now serves at Upland, the colossal short ribs known as the Brontosaurus Rib at New York’s Mighty Quinn’s BBQ, and probably some short ribs from Texas and Korean restaurants if somebody does enough research.

Like at many of these places, when you order short ribs at Odys + Penelope, all you get is short ribs. You can order sides if you want, of course, but the point is clear: The beef stands alone.

Kids’ Menus Aren’t as Terrible as They Used to Be