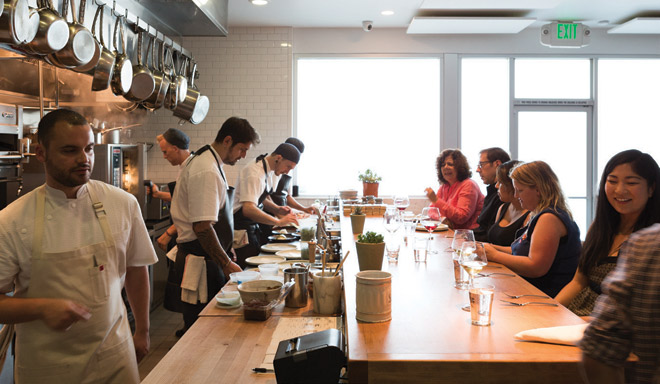 It’s a glorious L.A. evening. Dusk peeks between billboards as the shuttle that ferries the Mozza valets to and from cars deposits them at the Unocal 76 at Melrose and Highland. They run toward their posts in a burst of yellow oxford shirts. Hunched behind the station and beside a rutted alley, a tired-looking strip mall seems strangely busy for having tenants such as Yum Yum Donuts, Tasty Thai, a dry cleaner, and Raffallo’s Pizza. A man dressed in an untucked striped shirt pauses in front of the pizza joint’s entrance to snap a phone pic. “The hottest restaurant in L.A.,” he says as his friends beam excited smiles.

That it is. Since Trois Mec debuted in the former Raffallo’s spot in April, its 26 seats have quickly become the most coveted in the city. We’ve had under-the-radar restaurants before (the Buffalo Club, the Little Door), but they are all like movie stars in shades and baseball caps, making sure you see how hard they’ve worked at not being noticed. Trois Mec (“three guys” in French) is not about false modesty. It combines the talents of Vinny Dotolo and Jon Shook—the duo who built a folktronic style around legacy ingredients like country ham at their Fairfax restaurant, Animal—with those of Ludovic Lefebvre, the French haute exile whose LudoBites pop-up drained all the starchy residue from gastronomy with each series of gigs.

Access to their joint restaurant is by tickets purchased online—a couple of bucks shy of $100 a person for a set five-course menu (there’s a vegetarian option, too)—either on alternate Fridays at 8 a.m. at the restaurant’s Web site or through MasterCard’s Priceless.com on Wednesdays at 9 a.m. As chef Grant Achatz explained when he debuted a similar system in Chicago a few years ago, paying ahead eliminates the financial loss of no-shows—the not-so-pretty flip side of dining as entertainment. You’re presented with a bill after the meal only for drinks or extra dishes. Cursing mankind while trying to nab a slot (seatings are staggered around 6 and 8 p.m.) doesn’t rank among my prouder moments, but after four times, I’ve found the process sort of heightens the anticipation.

When the appointed hour comes, you’re welcomed into a small room, where the staff issues a “bon soir” as festive as the “irasshai” you get at a sushi restaurant. Dark wood chairs (designed by a SCI-Arc alum) encircle four bare tables, a sheathing of mirror adding volume to the otherwise tight space. The compact beechwood counter puts you practically face-to-face with Lefebvre and his crew, wrapped in navy blue leather aprons, laying thin pounded beef over caramelized eggplant with fermented black walnuts. A copper duck press you might see at La Tour d’Argent sits beside a silver punch bowl used to chill wine. On a high shelf, above dangling pans, is a pickling crock. The room buzzes. There’s laughter from a foursome; in a seat by the door, a man in one of those corrupt-Roman-senator haircuts that fiftysomethings favor sips his Echezeaux with a much younger woman. As Lefebvre—42, with tousled black hair and Japanese sleeves of tattoos up both arms—helps an intent cook shape a giant napoleon, piping ribbons of cream down its golden center, even two hip-hop gastronomes know to wait before asking him to sign a copy of his latest book, LudoBites.

Lefebvre is a son of Auxerre, the provincial hub of the Yonne, a region of tree-lined canals, flinty white wines from nearby Chablis, and chalky chèvre. Though he’s been cooking in high-end kitchens since 14, when he apprenticed with Marc Meneau at the three-star L’Espérance in Burgundy, he fits in well with Shook and Dotolo, two Floridians with a taste for big, lush flavors and grounded irreverence. The duo famously forged a surf-shack luxe with foie gras loco moco; Lefebvre countered with fried chicken in duck fat and piquillo ketchup at LudoBites, uncorking a kind of Gascon-Southern mash-up of his own. When he arrived in L.A. from France in 1996, he was one of any number of European-trained hired guns, from Puck to Splichal, who came to fashion dishes of a distinctly unyielding style. He’d worked as commis (read: grunt) for Pierre Gagnaire in Saint-Étienne, toiled as chef de partie at Alain Passard’s L’Arpege in the seventh arrondissement. L’Orangerie, his first post in L.A., was a stalwart of old-school standards leavened with just enough of the Petit Trianon to be considered a landmark.

Lefebvre followed that in 2004 with a stint at Bastide, the urbane hideaway on Melrose Place. By then he was already prodding the style he grew up with to see how much pressure it could withstand. I remember an amuse-bouche that cleaved a Bloody Mary into tomato sorbet, celery foam, and a jolt of cubed vodka gelée. After he’d exited through Bastide’s ever-revolving door, he asked himself a question: What if he stripped restaurant clutter away entirely and focused just on the food? Like some tong-wielding doctoral candidate, he proposed that talent, not atmospherics, was the main draw. The L.A. pop-up was born. The mob scenes that followed him from places like Breadbar to Gram & Papa’s proved him right.

Trois Mec is a fixed location but still carries itself like a pop-up—the deemphasis on address, the subtlety of the atmospherics, the narrow gap between kitchen and customer. Just don’t be fooled by the casualness; this is an elegant place. The service, overseen by Adam Vourvoulis, is spot-on. Complimentary manzanita-flavored Picon cocktails appear beside your plate at the start of the meal. The wine by the glass might be Corton poured from magnums. They’re also happy to recommend pairings of bone-dry Norman cider or a hoppy 3 Monts ale from Flanders that’s nimble enough to parry the tandoori spices of the crisp little madeleine that sometimes starts a meal or the sweet clover butter melting over a bun of grilled brioche.

It’s an intense dish, all the more so when you can wait long enough (as chef de cuisine Doug Rankin advises when he hands it across the counter) for the pat to melt. Airy and scored by grill marks, the brioche seemingly evaporates when you put it in your mouth and you get a hit of that herbal butter. Like a motif, butter’s all over the menu. At times it’s as if you’re in a scene from the iconic Fernandel comedy, La Cuisine au Beurre. Though my patience for butter—the easy silkiness and hollow harmonies it affords cooks—is growing thin, I can’t help but respect the intentional, almost structural way it’s used here. As a vehicle for miso, foamed butter adds an intricate layer to wild striped bass with petals of super-thin ibérico de bellota, the Spanish cured ham. Poured over a mound of potato pulped à la minute (one of Trois Mec’s finest dishes), a tiny ladle of clarified butter is enough to link the mountainy sharpness of Salers cheese and the maritime tang of bonito flakes.

Such Japanese touches are as omnipresent as the butter, from that greeting when you enter to the crackling tempura husk around a cob of baby corn served with salsa verde to the heavy, hand-cast earthenware. On each of my visits the first course has been avocado with sushi rice and salt cod whipped cream. I’ve had it four times over two months (Lefebvre could afford to be less conscious of consistency), but with each rendering, I pick up on different qualities. When the avocado slices are especially thin, the lump of salt cod tucked into the cream gives an extra briny pop. When the citrus is particularly assertive, it hints at a good guacamole. But then the plump, rich grains of rice nudge the preparation in the direction of sushi—well, at least, as close as a deconstructed brandade roll can get to sushi.

This, however, is not a restaurant focused on how one nation’s cuisine interlocks with another. While there are a slew of other influences that show Lefebvre’s open-mindedness—those fermented walnuts add a definite Korean kick to the pounded beef—the bedrock of the menu is his homeland. Lefebvre’s interpretation of French cuisine is radical in that it proceeds by indirection. He doesn’t need to put Gallic elements front and center, because he is constantly weaving them into the mix, using a trace amount of beurre noisette almost as a counterpoint to the leche de tigre, a Peruvian wakame-laced ceviche marinade with grilled black garlic. At times he seems to be overseeing a colloquy between haute and farmhouse cooking. He makes a bouillon, the anti-sauce, from pea pods, then refines matters by using the broth to bathe shucked peas and trembling bone marrow custard. The clam-packed, mustard-fortified broth he served one night over a pink slice of wood-grilled Ibérico pork so assuredly connected the integrity of modern ingredients with the pleasures of bistro fare—Julia Child’s Sauce Robert in the heirloom age—that it stopped me in my tracks.

On another night Ryan Dance, who helps run the service, approached and asked whether I’d like to add a dish to the fixed menu. Served with a spoonful of smoke-infused ice cream, the $9 grilled Boschetto cheese sandwich is fired over almond wood, a truffled ooze pushing out between crusts of charred white bread. Beyond being a fairly fantastic side trip, it was a reminder that Lefebvre isn’t one to be constrained and could well turn to all-American five-and-ten diner classics next. The restaurant may be a collaboration, but the vision is Lefebvre’s. He’s on TV, has books, adorns billboards. He could have had a restaurant that seats a hundred or two, but Lefebvre chose one that seats 26 and hides in a quintessentially L.A. strip mall. If you’re expecting a showman who’s going to hold the room, you’ll be disappointed. There is nothing of the diva about him as he lines up plates or exhorts his crew to wipe down their stations before the second rush. He’s got nowhere to hide in the open kitchen, no room for the contrived drama often associated with chefs. As you walk out the door into the glow of the Unocal station, you leave a very real world behind.

Drinks: All-French list skews to burgundy, with a showing of lesser-known appellations from other areas

Kid friendly? Young’uns would probably be at sea