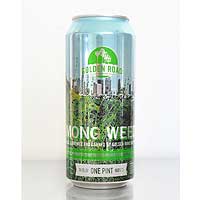 While Team USA goes down its own golden road, we’re celebrating the brand new release from L.A.’s own Golden Road Brewing Company. Hitting store shelves as well as the Atwater Village-based brew pub today, Wolf Among Weeds Double IPA is a hop-heavy beast of a beer and the first in the brewery’s Custom IPA series, which will include two to three specialty beers per year.

Golden Road co-owner Meg Gill is giddy over the company’s latest creation, which she says is the culmination of a year’s worth of recipe perfecting. It sports a stiff 8% ABV and carries notes of fresh pine sap and tropical fruit. As for the name? It comes from the hop species Humulus Lupulus, which is showcased in this particular beer.

For now, the new suds are only available in Golden Road’s signature tall-boy 16-ounce cans. Pick some up in time for National IPA Day (it’s a thing) tomorrow! Cheers.