Home Uncategorized Going To the Dark Side with Jja Jang Myun 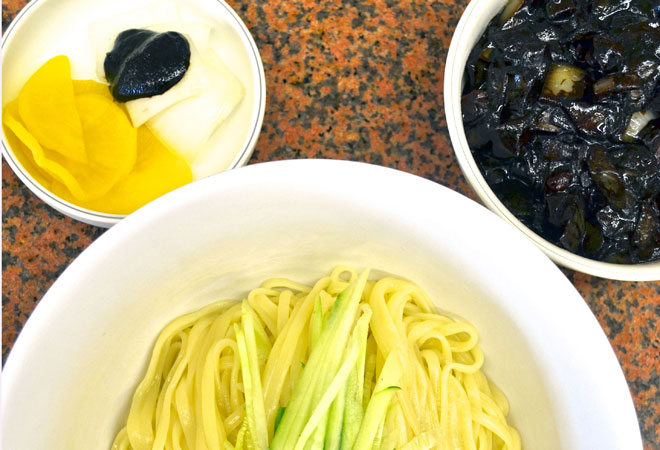 As a former ne’er-do-well, I used to find myself in sticky situations constantly. Nowadays, the only sticky sitch I want to be in is face-first in a big bowl of jja jang myun.

Thick as tar, black as pitch, jja jang myun—the Korean adaptation of a Chinese noodle dish from Shandong—literally translates to “fried sauce noodles.” The base for the sauce is chunjang, a black soybean paste. The standard jja jang traps within it minced pork or seafood as well as bits of onion or other veggies. Typically, a hand-pulled, broad wheat noodle takes the role of the starch.

Pouring the sauce over the noodles is not all that different from supervising a cement truck offloading its concrete mix onto a new sidewalk. The sauce behaves like some creature from the bog, sludgy and melanoid—the murkiest of condiments.

Once married to the noodles, the clinch of the sauce is practically permanent, like stepping into a plot of freshly set pavement. This is the joy of jja jang myun. The noodles become hearty and thick with savory and salty flavors, with even a bit of sweetness.

My latest bowl of the Korean-style fried sauce noodles was from the Chinese-Korean restaurant Zhi Shing Zaung in Northridge. Here they offer a few variations on the classic dish. A traditional side of raw onion dolloped with uncooked jja jang is offered as a sort of amuse, and the sweet, day-glow yellow, pickled daikon known as danmuji is also thrown in as a freebie treat. Zhi Shing Zaung prepares a top-notch classic version of jja jang myun with minced pork, but I went with a meatier choice: the “pork fry black bean sauce with noodle.” Bits of cubed and fried pork belly, white onion, and fresh cucumber sticks are twirled and mixed until the light noodles and dark jja jang become entwined like an edible taijitu.