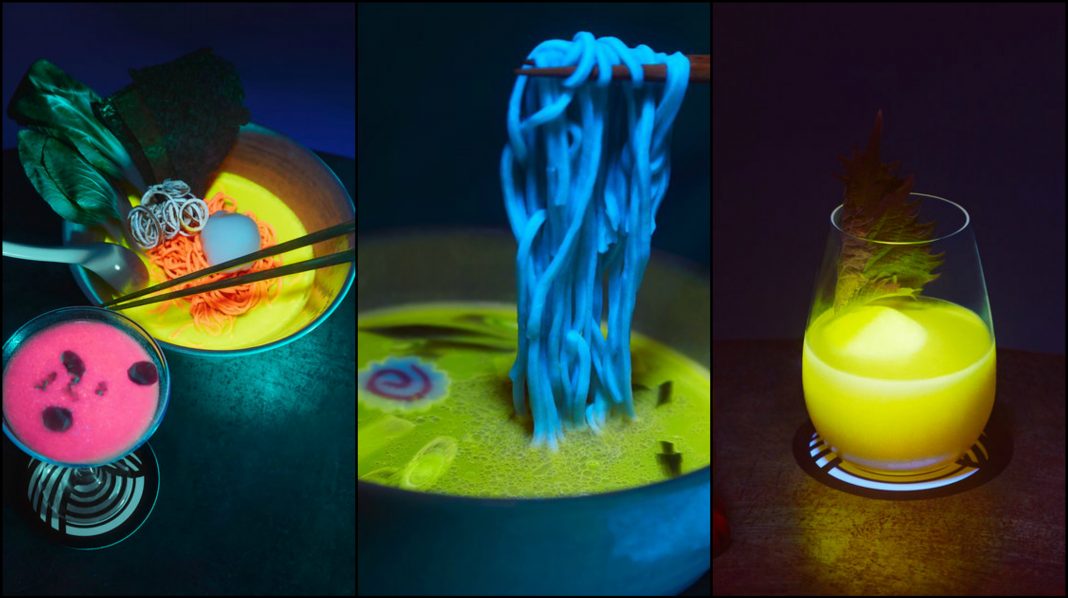 Here’s how it works: You’ll snag a ticket in advance for a timed session during the pop-up’s run (July 3 to 21). Upon arrival, you’ll be greeted by the Nakamuras, a family of yōkai, mystical spirits from Japanese legend (no big deal). They’ll tell you their story about ghosts and ramen, and then lead you into the eerie, neon-colored ramen shop for a meal (again, very chill, normal dinner).

Well, OK, maybe that’s not technically what’s going on. As Atlanta reported when Nakamura.ke debuted in that city, the truth is sadly a bit more quotidian.

The project is the brainchild of non-mystical industrial designer Ami Sueki who used to work for Coca-Cola. She partnered with her friend Courtney Hammond of creative agency Dashboard to pull everything together.

Making the food glow was a tricky bit for the Nakamura.ke team. While diners are encouraged to attribute the luminescence to the supernatural, it’s actually mostly done with quinine. Yes, the same ingredient that gives your gin-and-tonic its distinctive flavor happens to be uncommonly responsive to black light.

That breakthrough came via Nakamura.ke’s global partners Bompas & Parr, a design studio that has also developed “multi-sensory fireworks” in London, a Heinz Beanz Flavour Experience, and a fully vegan hotel suite for Hilton incorporating pineapple-based Piñatex materials for everything from flooring to keycards.

RELATED: 5 Bowls of the Best Ramen in L.A.

This Brothless Ramen Is Perfect for the Sweaty Part of Summer