Home Uncategorized Girl Talk: What it Means to Be a Female Bartender in L.A. 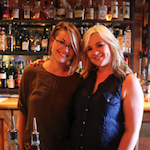 Drinkers see the moustache, vest, and tie behind the bar and are convinced that they’ll get the best crafty classic cocktail. With headline-making bartenders Julian Cox, Marcos Tello, Steve Livigni, and Pablo Moix (most of which don’t actually sport that uniform, by the way) at the forefront of the L.A. bar scene it’s easy to see why many people regard the industry as a boys club.

But the ladies have been rising to prominent positions in L.A. bars. A couple of years ago Naomi Schimek took over as director of spirits for Aidan Demarest at Hollywood Roosevelt’s the Spare Room, Brent Falco has managed Cole’s downtown for four years, and Kate Grutman runs the bar at members-only Soho House West Hollywood, to name but a few. I’ve asked them if there is such a thing as a glass ceiling in the bartender trade and how they’ve dealt with it. Also, what do they really think of that bartender uniform?

➻ Do you think the bartending industry is a boys club?

Brent Falco (Cole’s bar manager): “If bartenders believe there is a ‘boys club’ they aren’t my friends in the Los Angeles bar scene.  In L.A. I look at bartending and bartenders as just a cool club to be apart of at the end of the day.”

Brittini Rae Peterson (Goldie’s bar manager): “It is a boys club. It’s very hard to actually make your mark in this town because you’re always trying to step in somebody else’s shoes. And I’m not saying there’s some anti-feminism thing going on, it’s just that everyone is used to men running the bar. So when I first started really caring about the business, I ran the bar at Tar Pit. People would come in the bar and they’d see one of my employees who’s male and say, ‘Oh no, I want to order a drink from him.’ The majority of your clientele is going to be male so I see them think that if they order from a woman that they know more than they do so they always order from the man. So I genuinely believe that it takes a woman two and a half years longer to gain respect in this industry. And it’s unfortunate and it’s definitely not my peers’ fault, it has nothing to do with anybody in the industry, because on the flipside in this industry, it’s always better to be a woman because we are the minority. But in terms of your customers, your crowd, and your guests, women aren’t normally behind the bar.”

Brynn Smith (Sotto’s co-bar director): “Sometimes it is a boys club, especially when I started but now us girls can kill most boys! Haha just sayin’!”

Danielle Crouch (Cana Rum Bar manager): “I worked in Vegas for a long time and bartending is very hard for men to get into. I know there was a seminar about women breaking the glass ceiling. And at the time I thought that was so silly because there’s so many wonderful women in the industry. And before I moved here I worked with Julie [Reiner] in New York who is frickin amazing. She is so good at creating cocktails, she will teach you how to live your life, she will teach you how to run the bar business, which a lot of the mentors don’t do. So I really learned a lot from her. My experience is a lot with women so I really didn’t see it. But the longer I’ve been here I have noticed it. I agree, especially in L.A. but I’ve seen it change though. I’ve seen the flip flop which is really cool. L.A. in general though has a really familial quality that a lot of places don’t have. It is kind of a boys club but it’s never felt like you can’t do it. I think you do have to be a little better than the boys to prove yourself. You have to be legit here.”

Kate Grutman (Soho House West Hollywood bar manager): “I don’t feel like it’s a boys club at all. There are so many talented, successful,  influential women in this industry who continue to pave their own way and set the trend(s). In fact, I have always preferred to work for men and next to the girls. I have seen more women dominate the bar than not be taken seriously. I think that the boys in the club know fair well by now, that when it comes speed, control, managing a crowd/volume, and keeping cool on our toes for hours on end, we can clearly hold our own.  Women have a higher threshold for pain… that’s why we can peacefully and coy-ishly wrangle the worst patrons without puffing our chests and fist pumping… and deliver the babies of course… not so different.”

Naomi Schimek (Spare Room director of spirits): “It’s subjective, it depends on the men you are dealing with at the time. As an industry of bartenders we fight against the stigma of our profession still. The public has prevailing attitudes left over from the Temperance movement still, although most may not realize it, the same way they don’t realize that why they are afraid of gin is still because of the horrific rotgut common during Prohibition. As women bartenders we face another issue on top of that, as there are still prevailing attitudes left over from the days where women weren’t even allowed in bars (the only women in the saloons out West were usually ‘working’). There is one bar even in downtown L.A. that only just let women in 30 years ago. Challenges. When cocktails first started downtown I was told by a particular establishment that I could not work there because they were going for a pre-Prohibition theme and women weren’t behind the bar back then so it wasn’t authentic. Happily those attitudes relented after a short while.”

➻ What’s the best thing about being a woman bartender?

Brent: “All the numbers I get at the end of the night! Haha. But, seriously I think women have some of the most amazing palates and  the women in Los Angeles bar scene are some of the most supportive, loving people I have ever met in life. Everyday I feel lucky to be behind a bar with them, partying with them, discussing cocktails, praising them, supporting them, and being able to call them my friends. There isn’t anything like us out there and it’s infectious to be around.”

Kate: “Friendships with the very ‘real’ and beautiful ladybirds in the community. Working with amazing and hilarious dudes and how protective they are of us at the end of the day. Putting on red lipstick only to wipe the sweat off that game face if yours with the bar rag that you’ve had tucked in your pocket all night.”

Naomi: “That I am not constrained by gender dynamics in cocktails. If I want to present a drink with a flower garnish and jasmine essence I don’t have to worry about getting my ass kicked. I feel bad for male bartenders, especially in smaller towns who may have created a wonderful drink they are proud of but maybe had to ditch it because the ingredients turned it pink and they were concerned about the guests’ reaction. I look forward to the day when many a man out there can enjoy a strawberry cocktail in elegant stemware without ridicule from their buddies. I applaud the men I do know who place an importance, as I do on eliminating gender dynamics in cocktails, or aren’t concerned with their drinks thought of as ‘gay.'”

➻ What do you think of that standard bartender’s uniform?

Brittini Rae: “As much as I’d love to be behind the bar in pants, a nice shirt and a vest and a tie, that’s not going to work. I still have yet to find a uniform that fits for women behind the bar.”

Brynn: “The standard bar uniform is overused. I try to be cute but also comfortable and of course show the girls a lil.

Naomi: “I love it but I loved it on Marlene Dietrich and Madonna, too. It is a personal style preference for me. I think everyone looks smashing in a suit–there’s a reason they’ve never gone away. I shop for cuff links as avidly as I do dresses.”

Ultimately, what do you want to do in this industry?

Brent:  “I want to support and work for a bourbon brand and own my own bar.”

Brittini Rae: “I’m writing a book called Bar Etiquette because no one knows what that is. And ultimately I want to keep being good at my job and keep trying harder. This industry’s amazing because there’s so many venues you can take: own your own bar, start trying to produce a spirits company, do cocktail consulting. There’s so many venues you can go down. I don’t care as long as I’m happy and as long as I know there’s somewhere else to go. I’m just happy being on the path I am right now.”

Naomi: “In the future I would like to own my own space but not a palace of cocktails. More like a quiet, little garden with a stage for jazz and poetry, food, great coffee beers and wines and gorgeous low proof cocktails. A lot of cobblers. A real community space.”

The Best Hangover Meals in the City, from Bartenders Who Would Know