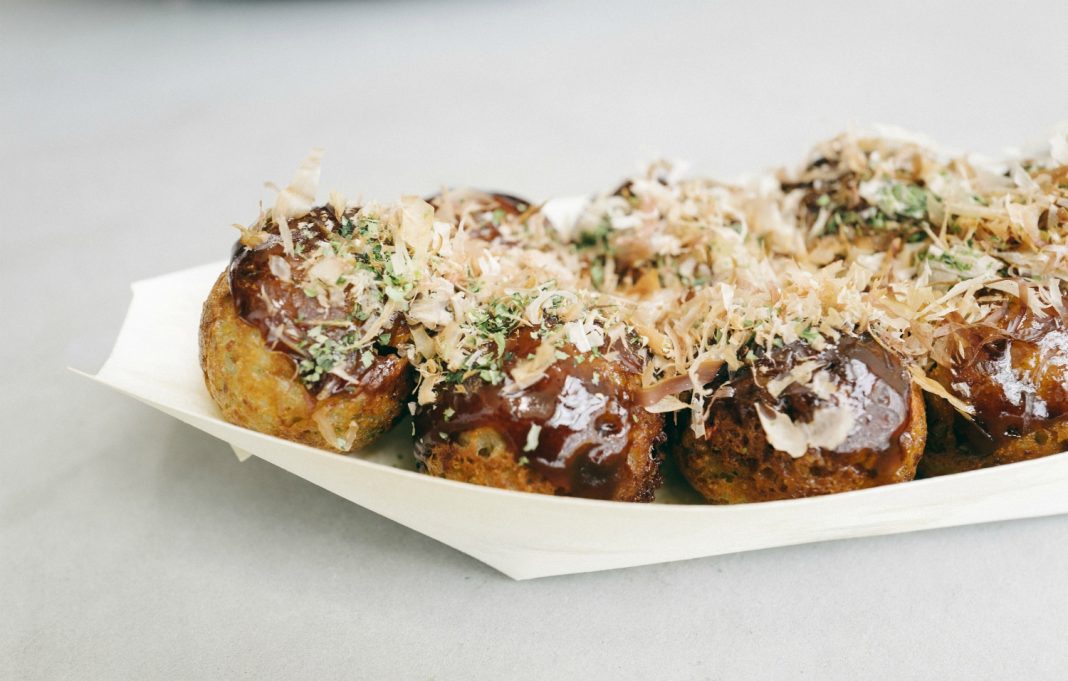 Southern California is blessed with a wide array of Japanese foods, from sushi to ramen to okonomiyaki. There are a number of restaurants that already serve takoyaki—the popular Japanese street food that’s sort of like a savory, battered aebleskiver filled with tender octopus chunks—but it’s a pretty big deal that Japan’s largest takoyaki chain, Gindaco, just landed in the South Bay with its very first North American location.

Gindaco is like the Starbucks of the takoyaki world, with nearly 500 outposts scattered throughout Japan, China, Hong Kong, Taiwan, Thailand, and Malaysia. The last time Gindaco, which has been operating for 31 years, made a visit stateside was a decade ago in the form of a monthlong pop-up in Los Angeles. There were lines out the door for that whole month, according to Gindaco USA’s CEO and president, Sky Whitehead. 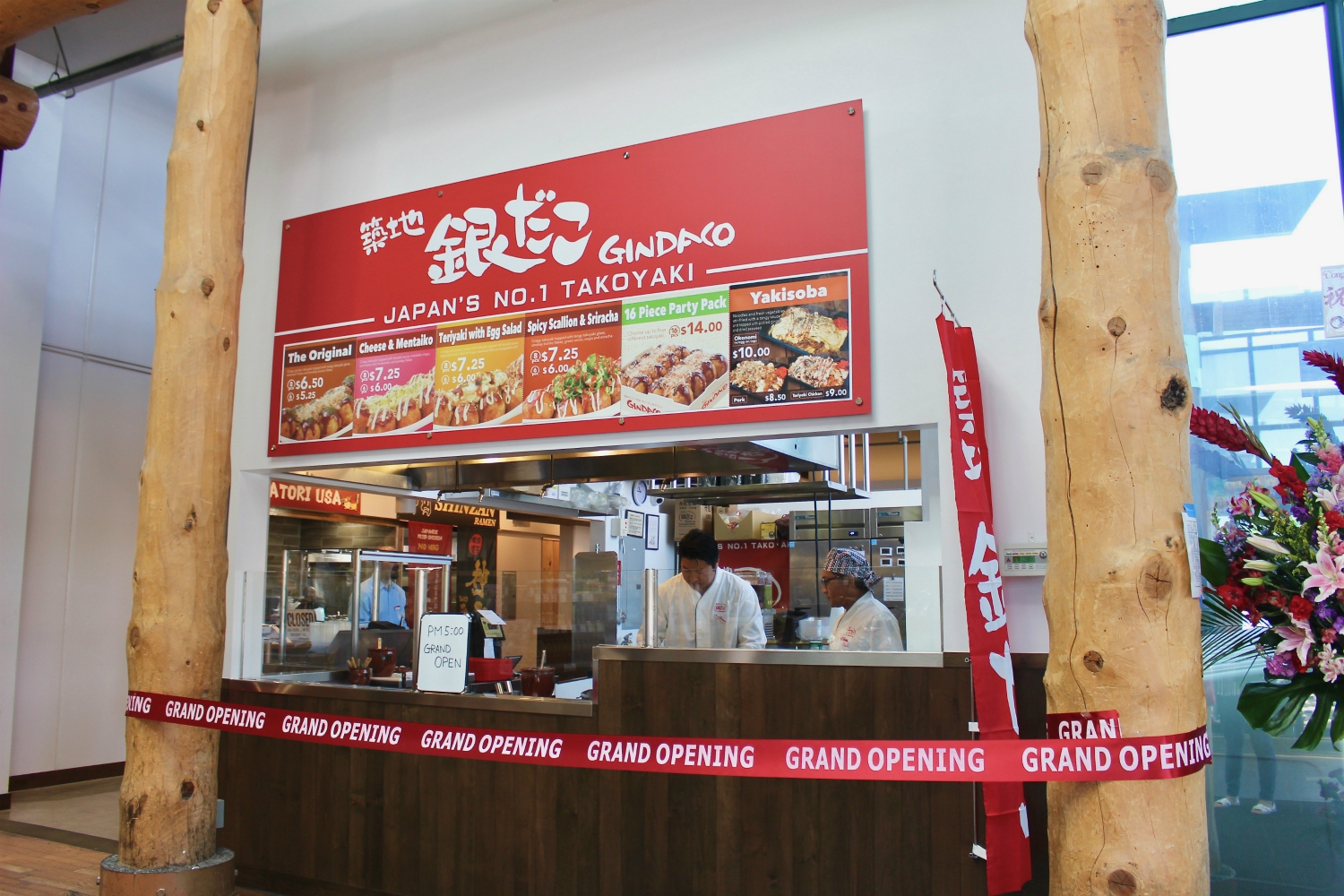 It’s been a longtime dream of Gindaco founder Morio Sase to bring his takoyaki chain to the U.S. “The real impetus was with McDonald’s and seeing them come to Japan,” Sase says through a translator. “There was this window that it presented, where you could peek through it and get a picture of America somehow. I always looked up to that, so I developed my own business. We always had it in the back of our minds, the desire to bring our Japanese fast food to the U.S., and through dining, provide U.S. consumers with a window to Japan.”

Gindaco’s new location is situated inside the food court of the newly renovated Tokyo Central Japanese supermarket in Gardena. The team hasn’t changed the takoyaki to suit American tastes, though they have added new flavors to the mix that are only available in the U.S. “Our first mission was to introduce the same product and the same flavors as we have in Japan so people who know the brand can have the same experience [that they’ve had in the past] and the people who don’t can first understand what takoyaki really is,” Sase says.

Takoyaki, which simply translates to grilled octopus, hails from Osaka and was invented by Tomekichi Endo in 1935. It’s common to find takoyaki carts lining the streets of Japan, particularly during festivals. “In Western Japan, takoyaki is kind of a beloved fast food,” says Whitehead, who had lived in Japan for years. “It’s a snack. When you’re a little bit hungry and you’re out with friends, some of you might get together and share it, you might get it to take home, or you might take it to a party. It’s existed for a long time, but there wasn’t really a national brand [until we came along].”

The anatomy of a takoyaki ball is a crispy, battered exterior with a soft-and-creamy inside filled not with only octopus but with flecks of crunchy tempura, pickled red ginger, and sliced scallions. In its most traditional form, the dish is served piping hot in a small, cardboard tray with anywhere from four to eight balls covered in a zigzag drizzle of a sweet-and-tangy glaze and Japanese Kewpie mayo. The balls are then showered with aonori (green seaweed) and katsuobushi (dried bonito flakes). One of the most aesthetically pleasing aspects of takoyaki is getting to watch the katsuobushi dance on the balls, a natural flickering movement that occurs when the thin fish shavings are hot.

Sase, a perfectionist when it comes to takoyaki, says they take special care to make sure the dumplings’ exteriors come out extremely crispy. He says they also use much larger chunks of octopus than their competitors. “When the octopus cooks inside the takoyaki, it releases moisture that imparts umami into the batter on the inside of the takoyaki,” Sase says. “At the end of the day, it’s about that perfect bite. It’s about the contrast of textures where you get this crispy, crunchy outside, and the nice and tender toothsomeness of the octopus itself and that creamy, airy, velvety [texture] of the batter on the inside.”

It’s an experience in itself watching a takoyaki maestro deftly flip each of these rounds with skewers in a griddle pan dimpled with hemispherical grooves. While others just use a stationary pan, Gindaco has a team of engineers who’ve created and manufactured their own griddles that vibrate, causing the takoyaki balls to spin around and cook evenly. When you order at Gindaco, you can peek through the glass barrier to watch your takoyaki get made.

Gindaco’s Gardena location carries a traditional preparation of takoyaki called “The Original,” as well as other popular flavors, like a melted parmesan and mozzarella blend served with a mentaiko (pollock roe) mayo and teriyaki sauce. There’s also one topped with a heap of egg salad and togarashi chili, and a U.S.-only special, the spicy scallion and sriracha. For those who want something other than takoyaki, the small menu also features yakisoba with pork or chicken teriyaki.

“Takoyaki is a great platform,” Whitehead says. “You can put any topping on it. We do things that are inspired by Italian and Thai food. The potential for the different combinations you can do are limitless.”

Sase, who’s now 55 years old, saw the potential for takoyaki at a young age. When he was in high school, he was intent on reading and absorbing a lot of content having to do with the food industry. He pored over books by the founders of Kentucky Fried Chicken and Starbucks, and was inspired by them to go into the fast-food business. His passion drove him to attend hospitality school, where he learned to cook.

“But what I wanted to do they weren’t teaching,” Sase says. “They were teaching French and Japanese cooking techniques for fine-dining restaurants with high price points. I wanted to do something that was really more targeted toward the masses.”

When Sase was 25, he had enough money to open his first takoyaki shop and slowly built his empire from there.

The takoyaki giant will continue to expand in the U.S. beyond this Gardena location. Gindaco is a subsidiary under its parent company HotLand Co., Ltd., which has a roster of other Japanese brands that Whitehead says they’re eager to import stateside. One of them is a kaarage (Japanese fried chicken) chain called Karayama. They plan on opening Karayama’s first U.S. location in Little Tokyo in mid-August, and will be launching 20 of these small-format restaurants, including Gindaco, in areas like Costa Mesa and the San Gabriel Valley over the next couple of years.

The team also has a tempura brand, as well as a taikyaki chain that makes fish-shaped croissant desserts that get injected with fillings like frozen custard or green-tea soft serve. These brands will come together for the group’s bigger project that’s on the horizon, which is creating large izakaya spaces that aesthetically replicate traditional Japanese street-stall culture. In their izakayas, guests will see yakisoba vendors situated next to takoyaki and yakitori makers, but get to order their food and drinks from a single waiter for all the items. The team is hoping to open one or two of their special concept izakayas in the next year.

As you wait for these other Japanese chains to make their way to Southern California, you can get a taste of Gindaco’s takoyaki. But remember, patience is a virtue: these freshly grilled balls come out steaming hot, so let them cool off for a bit before taking a big, delicious bite.