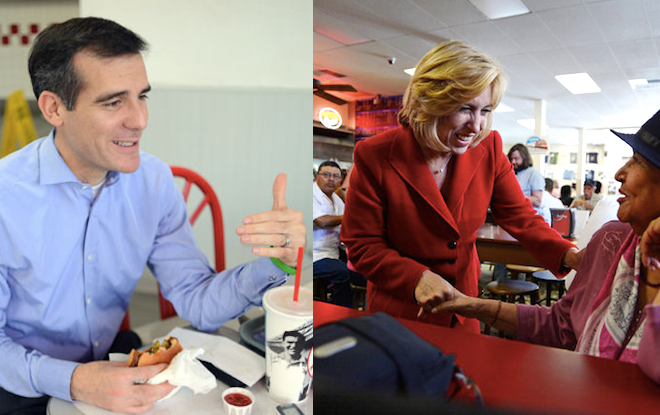 Today’s the day one food-loving mayor steps down and another is elected. If you haven’t yet voted, get on it. Today, City Controller Wendy Greuel is pounding some tasty pavement across the city while Councilman Eric Garcetti hams it up with cooks, chefs, and diners. Here’s where you can join Greuel or Garcetti for a quick meal and hand-shake. Bring a baby, they might kiss it.

Wendy Greuel is having lunch today at 12:30 at Langer’s Deli. No word yet on whether or not she will get the #19. After that, she’s off to Guisado’s on Cesar Chavez at 1:15 p.m. The rest of her stops for the day are at campaign offices around the city.

Eric Garcetti, on the other hand, is visiting no less than five restaurants today. At 11:30, he will greet West L.A. voters at Apple Pan on Pico. An hour later, he pops into Original Tommy’s in North Hills for a chiliburger. At 1:30, he’s scheduled to appear at Brent’s Deli in Northridge. He’s going to take a little break to digest, but then by 5:45 p.m. he’s expected at Two Boots Pizza on Sunset in Echo Park. He’s ending the day in Atwater Village at 6:45 p.m. with another meal at Link n Hops on Glendale.

So though Greuel looks good in a waitress outfit at Du-Par’s, Garcetti appears to have the bigger appetite.