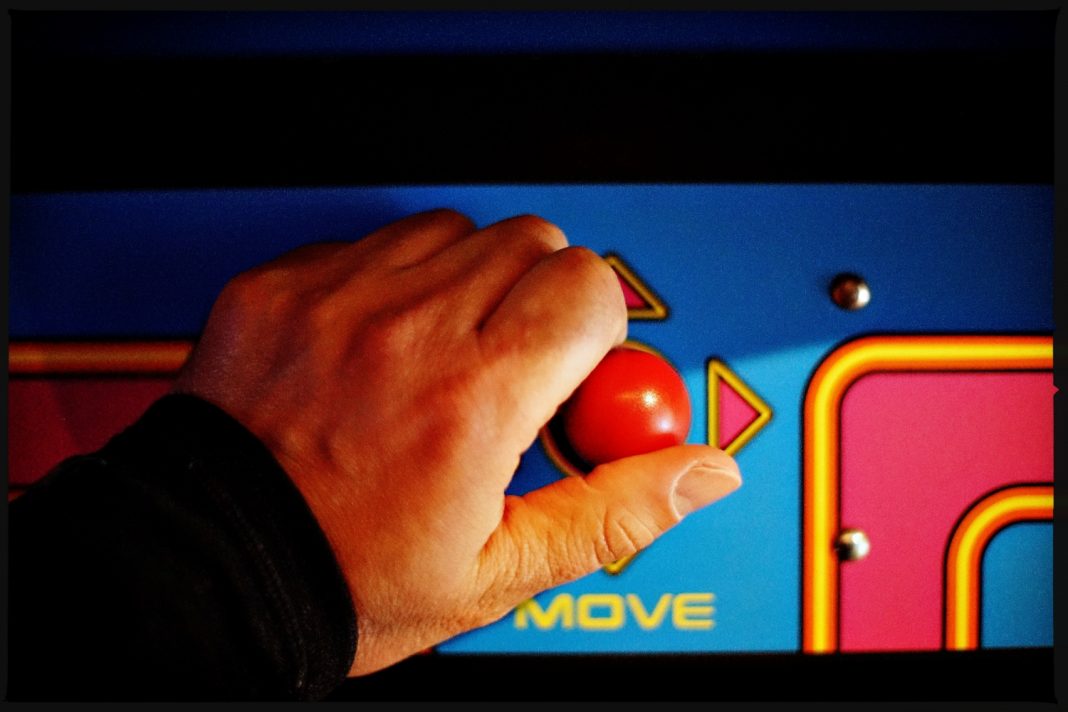 Few things are more fun than getting together with friends for a little gaming and drinking. But maybe your gang’s tired of your collection and wants to spice things up. Well, you’re in luck because over the last few years it’s become fairly common to see board games and arcade cabinets pop up in bars. Even better, Los Angeles is crawling with dedicated bar arcades and board game cafes. Here are some of the best bets for gaming with a drink in hand.

Barcade claims to be the “original arcade bar,” opening its first location in Brooklyn in 2004. Since then, it’s spread across the country, and earlier in 2019, opened up a Highland Park outpost. Barcade has a selection of 70 arcade cabinets and pinball machines, classic and modern, including cult favorites like NFL Blitz and a wild four-player version of Pac-Man. On the drink side, they’ve collaborated with breweries like Abita for exclusive beers. 5684 York Blvd., Highland Park.

Open for nearly a decade, Blipsy is a modest dive bar with a selection of classic arcade cabinets like Donkey Kong and Spy Hunter. In addition to quarters, you’ll need to bring some cold hard cash, as the full bar is cash only. In true dive fashion, there’s no sign, but the small mural of Pac-Man’s iconic maze and dots will tell you you’re in the right place. 369 N. Western Ave., Koreatown.

Miracle Mile’s Busby’s East is whatever you want it to be: a sports bar, it’s a dance club, an arcade—it even has a nine-hole miniature golf course. Whether you like your gaming digital or analog, you’ll be happy here. In addition to the arcade, the bar has a selection of board games you can borrow for the evening, mostly tried-and-true classics like Sorry! and Monopoly. If you’re in the mood for something a little more physical, Busby’s has pool tables, Skee-Ball, and darts too. 5364 Wilshire Blvd., Mid-Wilshire.

While Echo Park’s Button Mash has an incredible game selection, including Punch-Out; the six-player, two-screen X-Men arcade game; and the Twilight Zone pinball machine, the real highlight is the food. Created by the Starry Kitchen team, the menu features elevated junk food with an Asian-fusion twist. Think crispy tofu balls, panko-crusted cauliflower cooked in an Orange Bang reduction, and shrimp and pineapple fried rice. For extra retro fun, Button Mash uses custom tokens for all of their machines, just like the arcades of old. 1391 W. Sunset Blvd., Echo Park.

Located inside Beverly Hills’ Hotel Palomar, the Double Take restaurant has a game room that features Skee-Ball, shuffleboard, pool, and darts. Board game geeks can enjoy classics like Scrabble, Connect Four, and Jenga, while there’s a PlayStation 4 with the latest editions of Madden and NBA 2K for video gamers. 10740 Wilshire Blvd., Beverly Hills.

Just two blocks east of Exposition Park is the Dragon & Meeple, a board game club that opened earlier this year. The name suggests a pub designed with board games in mind, a Meeple being the name for the little wooden people you often see in European board games. With a selection of 400 games, plus tables with overhead LED lights and comfortable chairs, it’s a board gamer’s paradise. The food is classic pub fare (burgers, salads, poutines), and there’s a wide selection of wine and draft beers. The Dragon & Meeple also has a small store where you can purchase new board games. 3742 S. Flower St., Exposition Park.

Located in the Arts District, EightyTwo is a minimalist space divided into four distinct sections. In the northwest, you’ll find the bar and a collection of vintage cabinets including NBA Jam, Street Fighter II, and The Simpsons and Ninja Turtles beat ‘em ups. The southeast room is entirely devoted to pinball. In between there’s a patio area with lots of seating and a parking lot that regularly hosts food trucks. As you stand in line to order gaming themed cocktails like Princess Peach, Zangief, or Kill Screen, you can watch matches from the bar’s Street Fighter II cabinet projected over the bar using a direct feed. 707 E. 4th Pl., downtown.

When GameHäus opened in Glendale’s Seeley building in 2013, it had a mere 700 games in its collection. Since then, its stock has doubled and even includes a few rare and out-of-print games. Don’t be too intimidated; whether your gaming taste doesn’t get more adventurous than Clue or if you want to spend an afternoon playing Twilight Imperium, there’s something for everyone. Just pull something from the shelf and you might discover your new favorite board game. Initially opened as a board game café, with sandwiches, pastries, coffees and sodas, GameHäus now also serves a limited selection of beers, ciders, and soju cocktails. 1800 S. Brand Blvd, #107, Glendale.

You’ve heard of sports bars, but what about an esports bar? With locations in Burbank and Whittier, GuildHall allows you to enjoy a full bar while watching Overwatch League and other video game competitions. If you’d rather play games then watch them, you can also enjoy one of the more than 150 board games in the bar’s collection. 3516 W. Victory Blvd, Burbank and 6741 Bright Ave., Whittier

The giant space invader sign should tell you all you need to know about Sherman Oaks’ the One Up. Like other bar arcades, the One Up features kitschy retro décor, ‘80s movies on the TV, and mom unapproved dishes like Cap’n Crunch Fried Chicken Wings. But what makes the One Up stand out is the arcade selection: While there are only about a half-dozen cabinets, each one has multiple games, including Super Mario Bros., King of Fighters, Double Dragon, and more. Best of all, the arcade cabinets are all free! 13625 Ventura Blvd., Sherman Oaks.

Recently opened in North Hollywood’s Arts District, Player One’s exterior, painted in the classic ’80s shades of purple, pink, and aqua, is hard to miss. Inside you’ll find beers and wine, as well as a wide variety of arcade games. Player One has a few rare versions of old favorites, including Cruisin’ World hooked up for four players and a Neo Geo machine that features Fatal Fury, Metal Slug, King of Fighters, and every other arcade game made by legendary publisher SNK. 5126 Lankershim Blvd., North Hollywood.

As the name punningly suggests, Spare Room in the Hollywood Roosevelt Hotel, is a cocktail lounge with two vintage bowling lanes. If you’re not into bowling, Spare Room is also a classy gaming parlor with custom made dominos, chess sets, card games, and even a custom Jenga set. If you feel like going on a treasure hunt, try finding the bar’s secret photo booth. 7000 Hollywood Blvd., Hollywood.

Walt’s Bar in Eagle Rock is the retro bar of your fever dreams. The room’s decor is magnificently, aggressively ’70s, with wood paneling, ketchup reds, and mustard yellows. While there’s a great selection of beer and wine, the real draw is pinball, as advertised out front in all-caps neon. There’s about a dozen machines from the ‘60s and ‘70s, some of which boast unusual features. For instance, the 1972 machine Fireball features “zipper flippers” that will periodically completely block the hole at the bottom and a spinning rubber disc in the center of the table that will send balls on a trajectory different than you expected. 4680 Eagle Rock Blvd., Eagle Rock.

RELATED: As People Search for Something Tactile, Board Games Are Booming in L.A.