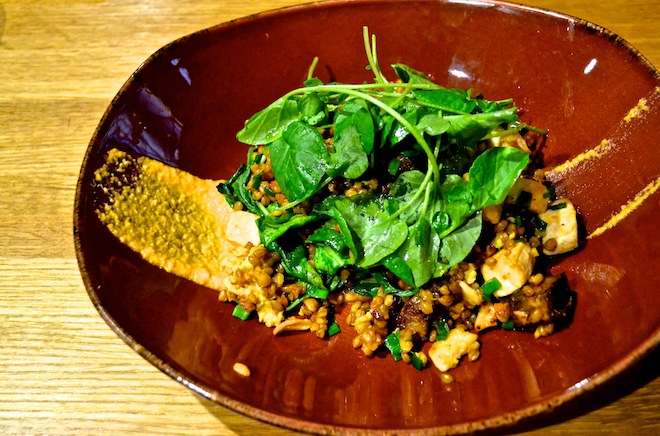 Fried rice is so taken for granted at Chinese restaurants that it is rarely ever “remixed” at non-Chinese establishments. But, it is precisely because of fried rice’s ubiquity and simplicity that riffs on it would be more welcome on menus across the city.

Humble, basic, and reliable, a fried rice recipe typically calls for cooked rice, green onions, eggs, and soy sauce, with everything stir-fried in some kind of flavorful oil.

At Long Beach’s new James Republic restaurant, fried rice has been modified to fit in with the breezy, ocean view neighborhood. James Republic describes its style as “modern California coastal” — which makes its farro fried rice a perfect fit on the menu.

Farro is an ancient grain similar to wheat; its flavor is nutty like barley. Italians like to cook it like risotto. But when it’s cooked and then fried, it absorbs the spice and smoke of the flavors it surrounds.

At James Republic, a farm egg, swordfish (or local fish of the day), tender short rib, fresh watercress, and a sweet, chunky cashew butter transform fried farro into something SoCal—with a Chinese accent.

Each mouthful is grainy and meaty. Soy sauce lingers after each bite. The onions and greens provide the veggies every tiger mom would insist you ingest, while the cashew butter adds a bit of sweetness and texture.

James Republic’s farro fried rice is fried rice all grown up, and something the kid in me can appreciate.