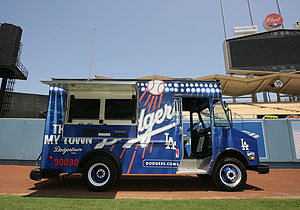 I feel like I’ve said this a lot lately: it was only a matter of time. Today, the food truck trend crosses over to non-food.

I know, I know—it feels like just yesterday we were flabbergasted by the idea of a truck serving anything more than straightforward tacos. But now, with sushi, burgers, dosas, fries, and everything else available curbside, why not Dodger Tickets? Today, the baseball franchise debuts its Dodgers Ticket Truck.

The mobile booth will travel around to different neighborhoods selling tickets to fans for upcoming games. You can, of course, follow its route on Twitter. The inaugural drive was captained by none other than Snoop Dogg. Awesome.

As of now, there are no plans to sell Dodger dog’s or $7 beers from the truck, but hey, you never know.